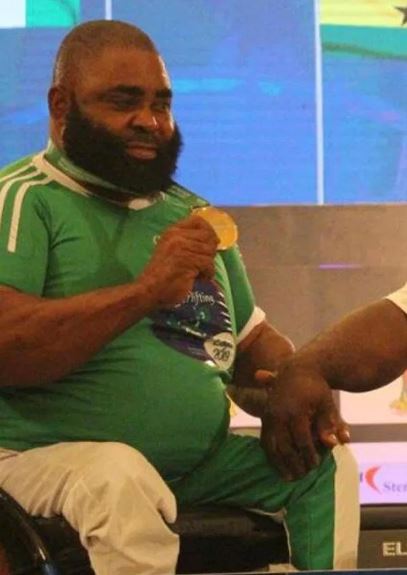 The 46-year old died after a very brief illness. According to his wife Anuli Ekpenyong, the silver medalist who lifted 107kg in the World Para Powerlifting World Cup in 2019 died since November 1, 2019 in his house in Ikorodu and was yet to be buried.

How could an athlete who represented Nigeria last year in a World championship die unsung?

Ekpenyong’s widow explained that he was only sick for three days.

“He was sick for only three days. He complained of headache which he also said was disturbing his eyeballs and his back. He said it felt like his eyes wanted to come out from its sockets, so we took him to a hospital on Monday in Ikorodu town because that’s where we live.

“We stayed in the hospital for three days and on the fourth day which was a Thursday, the doctor said we should take him home because they said it was not what could be handled in the hospital. His blood pressure was too high.

“We left and I carried him to a church on Thursday. The church belonged to one Calabar man. The pastor said that we should take him home and that they will come on Friday to do an all night vigil for him. So I took him home. Even that night, one of his friends called Niyi came with one man to ‘work’ for him. Niyi is his best friend and also a powerlifter. When the man finished, he left .

“Around 7 or 8 o’clock, my husband who was talking well before then suddenly started breathing abnormally. I ran outside and called people to come and help me. People came and held him and before I knew what was happening, he gave up o”.

I asked Mrs Ekpenyong about the family members of his husband.

“His sisters came to my house and said they want to go and see their brother in the mortuary. They collected the death certificate from the man who helped me to take my husband to the morgue . After seeing him, the sisters said they want to carry his body to the village so they took him home.

“Before then, they became quarrelsome. We are in good terms but I was surprised when they came and started asking for some of my husband’s documents. They were asking many questions. Where is the file? Where are his documents? Whether  my husband bought land? I told them that I don’t know anything. I went inside and carried a file my husband kept and gave them. They went through it and said this was not the file they wanted .

They asked me how many accounts my husband opened? I got angry and asked them if this was the questions they should be asking me at this time of grief. When my husband was sick, I called his sisters. None of them came. When he died and his body was in the house, I called them and none of them came. Now they came on Sunday and started asking for his property. I said madam, I don’t know anything o!

“That day, Coach Agbor was there and he told me not to say anything. Ijeoma was also there. She was the one who asked them why they were oppressing the poor widow with these young children. Instead of consoling her, you people are fighting for property even when the body is just one day old in the mortuary.

“I don’t really understand! I don’t know if this is how they do in their place? Anyway, when they wanted to carry the corpse to the village, they said I must follow them to go to the village and stay there. It was that coach who asked them if they’ll feed me and my children in the village. I went to the village with them.

“My family now said no that they can’t leave me in the village when they’re not yet ready to bury my husband and moreover, my children are just 7 and 4 years old. I came back to Lagos. It’s only his brother who calls me but the five sisters…. hmmm.”.

I asked Ekpenyong’s widow if there was any property of her husband that the sisters were after.

“For where? Nothing! He left nothing instead we are in debt… in short… (she breaks down and started sobbing)

“ Only God knows how we are going to survive. I want to beg the government to help me to take care of my children. I don’t want them to stop school. Their dad said  before his death that the first daughter will be a doctor, the second a lawyer and the third, an engineer. Let it come to pass.

“Before he died, he told me to look after the children. That I should make sure that there is unity and love among his children. He wanted his children to be educated. Now I’ll look for something to do to make sure they go to school . My children are my problem now”.

In an emotion laden voice, Mrs Ekpenyong said she will miss her husband sorely.

“My husband was a nice man. Very nice and he had no problem with anyone. If you offend him, he will shout but it will end there. He bears no grudges. He was bold and if you did anything wrong, he will tell you.  He was a very good man.

“I will remember him for everything….Everything… ( she starts to sob again and her voice peaks) Everything…ah! He was there for me. He never allowed me to lack anything. He loved me and never let me cry. He only wanted to make me happy…(sobbing).

Ini Ekpenyong met his wife Anuli who hails from Isele Uku in Delta state at a friend’s wedding in 2008 and got married.

It was Coach Feyisetan Are who broke this news to me while we chatted on phone about the late Olympic Gold medalist, Ndidi Nwosu who died on March 1, 2020

“We even lost another Para Powerlifter…” Are said on phone.

He gave me the wife’s phone number and I quickly put a call through to her.

Are, a well known para Powerlifting coach told me that not much was known about Ekpenyong who was just beginning to come to limelight.

“He was just an upcoming athlete, though he started powerlifting in 1996. He represented Delta state at the National Sports festival and they employed him.

“Before then, he was a Lagos athlete and I trained him. He was a very very good athlete. The only problem he had was that Nigeria doesn’t go to international Para Powerlifting competitions with heavyweights because, internationally, the heavyweights push almost 290kg to 300kg while here, we lift just 200kg. The heaviest Ini lifted was 170kg during the last World Para Powerlifting Championship held in Abuja. That’s why he wasn’t able to represent the country, coupled with age and other factors.

“The problem is that most of them will not come out to say they’re sick because they don’t want to be dropped from any competition. Some too don’t have money to go to a good hospital so they stay at home. “

Areh prayed the Delta state government to help the children of the late athlete to get educated at the university level,  provide a one or two bedroom apartment for the family and give the wife employment in Delta state.

Until his death, Ini Ekpenyong worked at the Delta State Sports Commission. He was employed by the state after competing for the state in the National Sports Festival in Abuja.

His wife confirmed that Ini Ekpenyong will be buried on April 24, 2020 in his home town in Itu local government area of Akwa Ibom state. He left behind a wife and three children. He was 46.