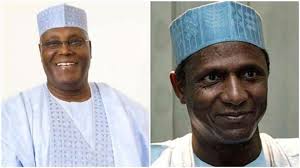 Former Vice President, Atiku Abubakar has described late President Umaru Musa Yar’Adua as an advocate and proponent of the rule of Law and the doctrine of Separation of Powers while he was alive.

Atiku who disclosed this in a statement seen by National Daily on Sunday to mark the 9th anniversary of the late president death, said Yar’Adua’s administration was the only administration that did not suffer from Executive-Legislative tensions in this fourth republic.

“In this period where Nigeria is facing almost unprecedented violence and insecurity, the world will remember that it was President Yar’Adua who bequeathed peace to the Niger Delta through his futuristic and visionary amnesty and rehabilitation programme.

The Peoples’ Democratic Party presidential candidate in the last general elections, said the late president’s action saw an unprecedented improvement in the performance of Nigeria’s oil and gas industry which led to record-breaking 5% GDP growth.

“May the Almighty Allah continue to shine His Noor (Light) on the face of our late dear President Umaru Yar’Adua as we mark 9 years of his passing and may Allah (SWT) grant him al-Jannah Firdaus.

“I also pray that God continues to bless the family he left behind. A grateful nation appreciates the labours of their beloved son almost a decade after his passing.”

Umaru Musa Yar’Adua was the 13th president of the Federal Republic of Nigeria. He was governor of Katsina State in northern Nigeria from 29 May 1999 to 28 May 2007. He was declared the winner of the controversial Nigerian presidential election held on 21 April 2007, and was sworn in on 29 May 2007.

In 2009, Yar’Adua left for Saudi Arabia to receive treatment for pericarditis. He returned to Nigeria on 24 February 2010, where he died on 5 May.