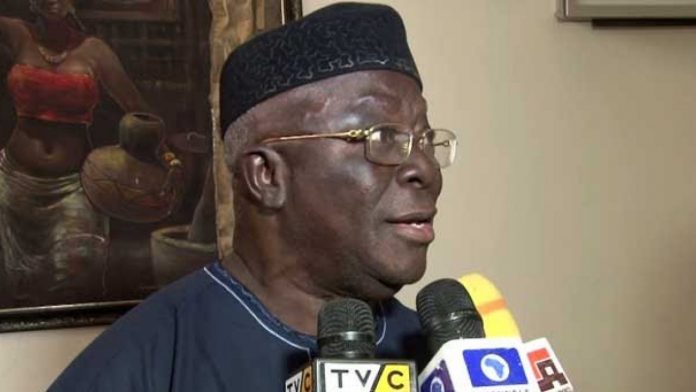 More revelations are coming up as two Yoruba elders exchange brickbats following an autobiography by one of them, ex-Gov Bisi Akande, who stung Afenifere leader Pa Ayo Adebanjo for sponging on APC leader Bola Tinubu when he was Lagos governor.

In “My Participations,” Akande stated he witnessed how Adebanjo, a bitter criti of Tinbu’s,  pressured the ex-governor of Lagos to build the Lekki home where the Afenifere leader lives

Adebanjo, responding, described Akande as Tinubu’s man Friday and neophyte who reaped where he didn’t sow.

He also stated the source of his wealth, and urged the EFCC to probe him, Akande, and Tinubu.

“There has been a lot of pressure on me not to react to Chief Bisi Akande’s tantrums, he is a neophyte, a beneficiary of a struggle he never took part in. I have been urged to keep to the adage not to “Answer a fool less you reduce yourself to his level, but there is also an adage that says, “Answer a fool less he thinks he is wise”. A lot has been said in the press and the social media to demolish tantrums.

“But I owe a duty to myself and to put the record straight for posterity about the big lie that Bola Tinubu built my house in Lekki for me.

“I therefore deny categorically that my house at Lekki was built with my resources through the sale of 3 developed properties, loan from GTBank and the sale of undeveloped landed property given me by my late leader Chief Obafemi Awolowo of blessed memory.

“The details are as follows: A 4 bedroom duplex with 2 bedroom flat enclosed with 2 undeveloped plots at plot 4, block 14, Nuru Oniwo Street, Aguda Surulere, Lagos State, this is where I was living before moving to Lekki. The house was commissioned in 1972 by Chief Obafemi Awolowo.

“The Lekki property, the house in my village, Isanya Ogbo, and 3 Bedroom flat in a town house, at Omorinre Street in Lekki are the properties I have in the whole world. I hereby authorize the EFCC to verify the above facts.

“It is alleged that Chief Bisi Akande’s building at Ila-Orogun, which I understand is more than double in expanse of my house in Lekki and some other properties he has in Lagos and abroad were financed by Bola Tinubu. His house in Ibadan was also alleged to have been built by the contractor that built the secretariat in Oshogbo, when he was the Governor of Osun State.

“I hereby challenge Chief Bisi Akande to clear the air by disclosing the source of financing these properties as I have done above.

“Asiwaju Bola Tinubu, the great philanthropist should also disclose the source of his wealth with which he bankrolled the elections of APC in the Southwest and that of General Muhammad Buhari and his various properties in Lagos. He should also authorize the EFCC to verify such details as I have done above.”