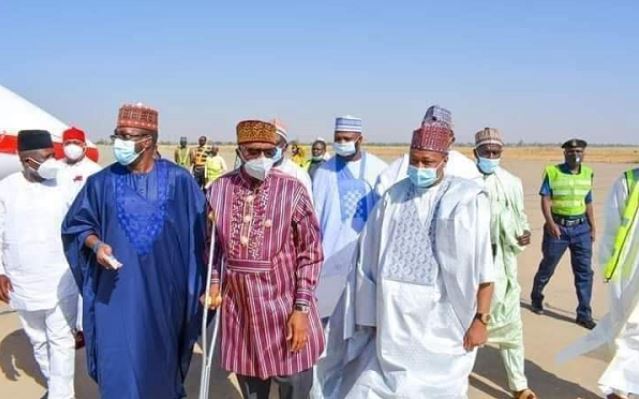 Minister Of Transportation, Amaechi Seen Walking With Crutches After Getting Injured (Photos)

It was gathered at the weekend that Rotimi Amaechi, the Nigerian Minister of Transportation has suffered a hairline fracture.

Amaechi was seen in a viral photo walking with the aid of crutches during the commissioning of an orphanage home and Arabic School in Kaita Local Government Area of Katsina State.

Though the circumstances that led to the fracture remained sketchy, a hairline fracture, according to doctors, is a tiny crack in a bone caused by repetitive stress or force often from overuse and mostly caused by repeatedly jumping up and down or running long distances.

Amaechi’s close associate and chieftain of the All Progressives Congress (APC), Eze Chukwuemeka Eze confirmed the development, The Nation reports.

He observed that some Nigerians, who gloated over the photos, concluded the Minister might be suffering from an ankle sprain while others said that he might be having either plantar fascitis, hemiplegia scissors gait or motor neuron lesion.

But Eze said the former Rivers Governor neither had hemiplegia scissors gait nor planter fasciitis, adding that Amaechi was also not suffering from knee arthritis or lower motor neuron lesion. 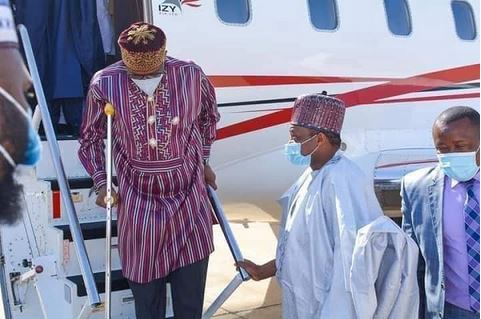 The party chief said he was, however, prompted by public concern to engage the minister, who said he had a hairline fracture but assured he was getting better.

He quoted Amaechi as saying: “I had a hairline fracture on 31st December, 2020 but I have been working with it all these weeks before the public pictures showing me with crutches. Nobody should express any fear as my doctors are on top of it”.

Eze said Amaechi by walking and working in pains and crutches demonstrated his patriotic zeal and commitment in contributing towards rebuilding the country.

He appealed to President Muhammadu Buhari to direct Amaechi to rest a little while and allow for a quick recovery from the painful fracture.

He said Amaechi with his level of patriotism was ready to risk his life in the service of the nation.

While asking Nigerians to continue to remember the Minister in their prayers, Eze condemned persons celebrating Amaechi’s condition, describing them as satanic.