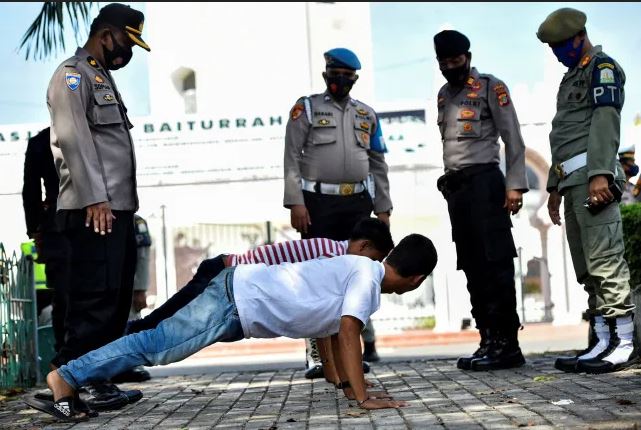 The men were forced to do pushups

Some men have been forced to do pushups after being caught without face masks in Indonesia.

According to Metro UK, a human rights group now claims ‘degrading’ punishments are being handed out to Indonesians who do not follow coronavirus regulations.

The unusual disciplines being handed out include making people do push-ups, pulling weeds, cleaning river banks, digging graves and lying in an open coffin.

The nation has the highest Covid-19 death toll in south-east Asia, with more than 10,300 deaths and 271,000 confirmed cases as of Saturday, according to the Johns Hopkins University Coronavirus Resource Center.

Rivanlee Anandar, a staff member of rights group Commission for Missing Persons and Victims of Violence, told VOA Indonesia that police officers and members of the military are being used to oversee the punishments.

He said: ‘The military should focus on national defence. There [are] no indicators or instruments to measure the effectiveness of involving the military in handling the pandemic.

‘Their role in picking up people who have tested positive [for] Covid-19 is too much. In several malls, they even take people’s temperature.’

Evani Jesselyn, who owns a coffee shop in Jakarta, was told she could clean public sewers or pay a fine after she was pulled over for not wearing a mask in her car.

She said: ‘I was alone, in the car, wearing my mask. However, suddenly I felt it was a bit hard to breathe, so I pulled my mask a bit to breathe some fresh air.’

After being pulled over, Evani was sent straight to a hearing where she spent an hour in a crowded hall waiting to see the judge.

‘I was scared to jump into the crowd, and quite upset as well because I was alone inside the car and healthy and they asked me to go to the crowd with no social distancing,’ she added.

She was eventually handed a fine.

Arifin, the head of the Jakarta provincial public order office, said educational outreach is being increased on how to wear masks correctly.

He said: ‘Some wear the mask under their chin or below their neck. This, of course, won’t prevent Covid-19 transmission.’

He added around 164,000 people have received punishments for not wearing masks correctly, ranging from fines to public service.

Police spokesperson M. Hendra Suhartiyono said the police were helping regional governments stop the spread of coronavirus through Operasi Yustisi, a national effort to crack down the violation of health regulations.

He added sanctions, such as public service, doing push-ups and spending time in a coffin, are ideas originating with regional governments.

‘We have to uphold local wisdom,’ he explained. 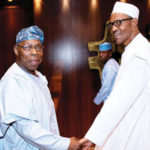 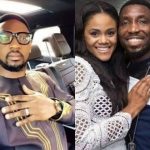 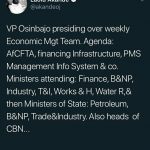 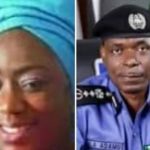