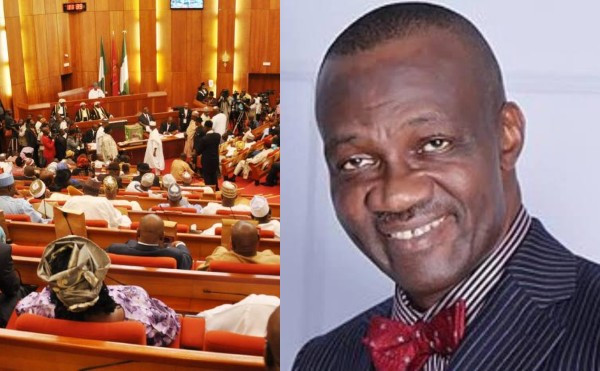 Senators Deny Being Paid N20m Each As Covid-19 Palliative, Demands Evidence From NCDC

The Nigerian Senate has challenged the Executive Director (Projects) of the Niger Delta Development Commission (NDDC), Dr Cairo Ojougboh, to prove his allegation that the commission gave between N15 million and N20 million as palliatives to members of the National Assembly.

The upper chamber said failure by Ojuogboh to prove the allegation, he should immediately retract his statement and tender an unreserved apology to the Assembly.

The NDDC Director had, in an interview published by a national daily alleged that the senators and members of the House of Representatives were beneficiaries of COVID-19 palliatives from NDDC.

Reacting to the allegation, the Chairman, Senate Committee on Media and Public Affairs, Senator Ajibola Basiru, in a statement, asked Ojuogboh to provide evidence to back up his claim that members of the National Assembly were beneficiaries of COVID-19 palliatives from the commission.

The Senate spokesman denied the allegation made by the Executive Director that members of both chambers of the National Assembly received the sum of N20 million and N15 million each as COVID-19 palliative from the commission.

Basiru, therefore, challenged Ojuogboh to provide the names of lawmakers who were beneficiaries of the said palliative, or immediately retract his statement alongside tendering an apology to the Assembly in the absence of evidence to backup his claims.

“The Senate views with grave concern a statement credited to Dr Cairo Ojougboh, the Executive Director, Projects of the NDDC who alleged that National Assembly members received varying sums of money as COVID-19 palliative. The Senate hereby disclaims the allegation in its entirety.

“The Senate categorically denies that any senator collected the sum of N20 million or any sum whatsoever from NDDC as Covid-19 relief fund for any purpose whatsoever.

“The Senate challenges Dr Ojougboh to publicly provide evidence of his claim and list the names of the senators he allegedly gave the alleged sum.

KanyiDaily recalls that the Minister of Niger Delta Affairs, Godswill Akpabio had also alleged that over 60 percent of contracts of the NDDC were given out to members of the National Assembly.