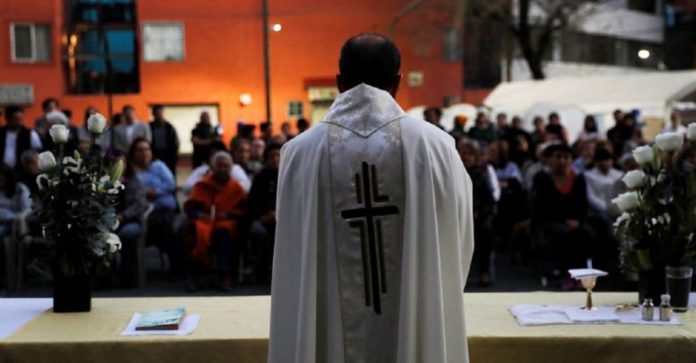 Court Grants Widow’s Motion To Stop Catholic Priest, Others From Selling Father-In-Law’s Bungalow To Another Priest In Onitsha

An Onitsha High Court in Anambra state, presided over by Justice Victoria Nwoye has granted a motion restraining a Catholic Priest, Rev. Fr. Zeribe Ibeneme and three others from selling, renovating, alienating or otherwise disposing of a bungalow belonging to the Late Lawrence Ibeneme which is situated at No. 11 Onwudiwe Street, Ontsha, pending the hearing and determination of the substantive suit.

The court also ordered that Rev. Fr. Emma Obimma (a.k.a Fr. Ebube Muonso), the buyer of the said bungalow, now in dispute and Mrs. Ekwunife Ibeto, the eldest surviving daughter of the late Lawrence Ibeneme be joined as co-defendants in the suit, adding that all the originating processes should be amended to reflect their names, while other processes filed in the suit be served on them.

She further stated in the affidavit that after George’s death, the first defendant/respondent and some of their family members started making demands for her to release the title documents in her possession, adding that even when a family meeting was called, it could not be resolved until she eventually agreed to release the title document to Rev. Fr. Ibeneme, the third respondent.

She further averred that a joint account was opened with Zenith bank to keep the proceeds from the properties until March 4, 2020 when her solicitor wrote to the tenants demanding for the accrued rents. My Tenants were shown a letter dated January 17, 2020 from a new landlord demanding the tenants to vacate the property on the strength of a sale agreement.

She alleged that the first to third defendants sold the property to a buyer whom the fourth respondent represents, adding that both the buyer, the fourth respondent and their privies are taking steps to destroy the building and alter the character of the residence, hence the application to restrain them, pending the determination of this suit.

Counsel to the defendants, Azubuike Anazor filed a 21-paragraph counter affidavit deposed to by the third respondent, Fr. Ibeneme for himself and other members of the Estate of the late Lawrence Ibeneme in which they denied many paragraphs of the plaintiff’s affidavit, adding that the late Lawrence has seven children and not only George.

They argued that after the death of Lawrence, his son, George did not take over Lawrence’s properties because George himself died 16 days after his father’s death, adding that the family met and agreed that the title documents be handed over to Fr. Ibeneme, the third respondent who was also mandated to jointly be the signatory to the account with the first respondent, Ifeanyi Paul Ibeneme.

They contended that it was when the 50-year lease was about to expire that the beneficiaries of the Estate came together with the applicant and the second respondent, Nwadinobi Cyril representing co-lessee agreed to let the original owner of the property sell it and remit part of the proceeds to the beneficiaries and the co-lessee, instead of losing out.

They admitted that on the strength of the MoU, the property was sold to Rev. Fr. Emmanuel Chibuzor Obimma (Fr. Ebube Muonso) and the proceeds remitted as agreed by the parties under the MoU, adding that the remaining title documents to the other properties have been handed over to the eldest surviving daughter of the late Lawrence, Mts. Ekwunife Ibeto and as the property was sold to Fr. Obimma, there was no way he (Obimma) or any of the respondents could demolish, renovate or tamper with the property.

Justice Nwoye noted that as a court of law, it has the inherent powers as guaranteed by Section 6(6) of the 1999 constitution, as amended and the discretion to order the joinder of a person whether as plaintiff or defendant whose presence before the court is necessary to enable the court effectually and completely adjudicate upon and settle all questions involved in the case or matter.

The plaintiff/applicant, Mrs. Nwando Ibeneme, wife of the late George Ibeneme, son of the late Lawrence Ibeneme, for herself and on behalf of other members of the Estate of the Late Lawrence, her father-in-law had approached the court with the motion on notice against four defendants/respondents, Ifeanyi Paul Ibeneme, Nwadinobi Cyril, Rev. Fr. Zeribe Ibeneme and Engr. Umeh E.

In the Motion No. 0/106/2020, filed on her behalf, by her legal counsel, Humphrey Udechukwu with S. U. Ezekwesili, the widow had sought an order of the court restraining the first to fourth defendants/respondents, their agents, servants and privies from inter-meddling with, selling, dealing or otherwise with any of the Late Lawrence Ibeneme’s properties in dispute.

In a 29-paragraph affidavit she deposed to in support of the motion, the plaintiff/applicant stated that in September 27, 1963, one Alphonnsus Nwadinobi entered into a lease agreement with the late Lawrence Ibeneme with respect to No. 11 Onwudiwe Street, Onitsha for a period of 50 years, adding that during their life time, the property was divided into two and rents were collected until the late Ibeneme acquired other above-mention properties.

She noted that after the death of Lawrence, his son, the late George took over the management of the properties, to the extent that herself and other members of the late George, her husband became the beneficiaries of the Estate of late Lawrence.