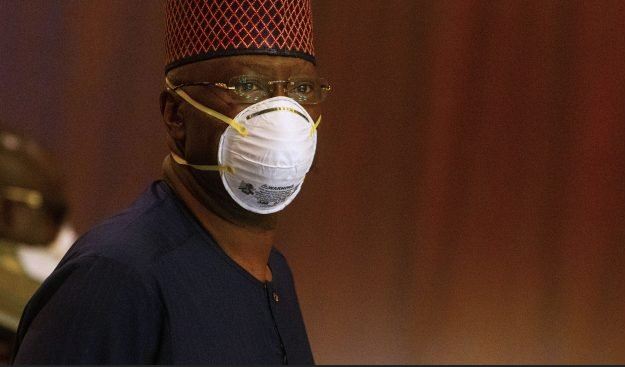 Over a week after receiving the Madagascan native formulation for the treatment of COVID-19, the Presidency has yet to send the samples to the National Agency for Food and Drug Administration and Control for testing, Sunday PUNCH reports.

A top source told one of our correspondents that the drug, which was delivered to the President, Major General Muhammadu Buhari (retd.), by his Guinea Bissau counterpart, Umarro Embalo, nine days ago had remained in the possession of the Secretary to the Government of the Federation, Boss Mustapha.

The source, who wished to remain anonymous, said with the manner in which things “are being done, the drug would not be available for testing till June given the Islamic holiday which extends from Sunday to Tuesday.”

He said, “We were told that the drug, which was delivered in five cartons, was delivered to the SGF who was supposed to deliver the sample to the Federal Ministry of Health and then NAFDAC for testing.

“However, as of today, May 23, 2020, the sample has not been sent to NAFDAC for testing. I even doubt if the ministry has received it. And work resumes on Wednesday.”
The source lamented the slow pace of work by the Federal Government regarding its response to COVID-19.

He noted that this was the same manner in which some drugs sent to Nigeria by the West African Health Organisation were delayed by over a month due to bureaucratic processes.

He added, “In March, WAHO (West African Health Organisation) distributed 30,500 diagnostic test kits; 10,000 Personal Protective Equipment and 740,000 Chloroquine and Azithromycin tablets to be shared by all ECOWAS states, including Nigeria.

“The drugs were to be certified by NAFDAC before use. However, NAFDAC only received the drugs a month after they had arrived. These delays were caused by government bureaucracy.”

The source lamented that it might be June before the Madagascan drug could be deployed for scientific analysis, adding that herbal drugs would need a longer testing period than orthodox medicine.

He said NAFDAC would check for animal toxicity, microbial content and others in the drug which might take about 10 days.

“It could take about 10 days for NAFDAC to test and certify the drugs. So, the Madagascan medicine ought to have been sent on time in anticipation of the testing time but that has not been done,” he said.

The SGF had, at the daily COVID-19 briefing last Tuesday, said he had received the consignment and it would be sent to the ministry of health.

Mustapha had said, “As God would have it, the President of Guinea Bissau decided to visit our President last Saturday and when he was coming, he came with our consignment of five cartons and those five cartons were delivered to me yesterday in the evening, sealed, without a bottle out of it.

“I am going to engage the minister of health who has the responsibility of validation, through his institutions that are chartered by law to do that. The President was upfront with that even when he took delivery of it from the President of Guinea Bissau.

“He said it quite clearly of what we are going to do with the consignment would be guided by science, under the processes of validation. We’ll now know where to go.”

However, a top source at the ministry of health told Sunday PUNCH that the cartons were still at the SGF’s office.

The source said there seemed to be a communication gap between the minister and the SGF.

“The SGF informed the minister to pick up the drugs but it seems the minister was also expecting the SGF to send the drugs to the ministry. It was a simple communication problem,” he said.

Following the arrival of the Madagascan herbal cure for COVID-19 in Nigeria, NAFDAC  promised to fast-track the laboratory examination of the drug named Covid Organics.

The agency, which regulates and controls the manufacture, importation, exportation, distribution, advertisement, sale and use of food, drugs, cosmetics, medical devices, packaged water, chemicals and detergents, noted that the product would be subjected to the normal procedure but that the process would be hastened.

In an interview with Sunday PUNCH two weeks ago, NAFDAC Director-General, Prof Mojisola Adeyeye, noted that the agency would prioritise the laboratory examination of the product once it received it from the authorities.

She had said, “When the drug arrives, it will go to the Minister of Health who will in turn hand it over to NAFDAC through the PTF. It is after that we would start our laboratory examination. It will be subjected to the normal procedure.

“We would expedite action on this because everyone is anxiously waiting for the result. We would speed it up but it will still have to go through the normal laboratory analysis and medical evaluation.

“Unlike the orthodox medicine, with the herbal medicine, it is given linctus status, it is not given full registration and that means it has a life span of two years, unlike normal drug that has a life span of five years. So, this is what will be applicable to the Madagascar drug. We would ensure that the claims being made are true.”

Asked how long it could take for the laboratory examination to be concluded, she said the normal procedure was three months, adding that given the situation at hand, the process would be prioritised without compromising the efficiency of the process.

She said, “The normal mandatory procedure is three months, but under this emergency, we would give it a top priority to come out with urgent results. In the process of the evaluation, if NAFDAC needs to get in touch with the manufacturers, we will. It all depends on the analysis in the lab.

“This kind of drug does not go through a clinical trial at this stage; it is only when it wants to go through registration that it will be subjected to clinical trial. We are only going to determine its safety and efficacy now.”

There were 265 new cases on Saturday, pushing the total number of cases to 7,526. 167 persons were discharged while no new death was recorded.

Efforts to speak with the Director of Information in the Office of the SGF, Mr Willie Bassey, on why NAFDAC had yet to receive the Madagascar’s solution proved abortive.

He neither answered the calls nor replied a text message sent to him.