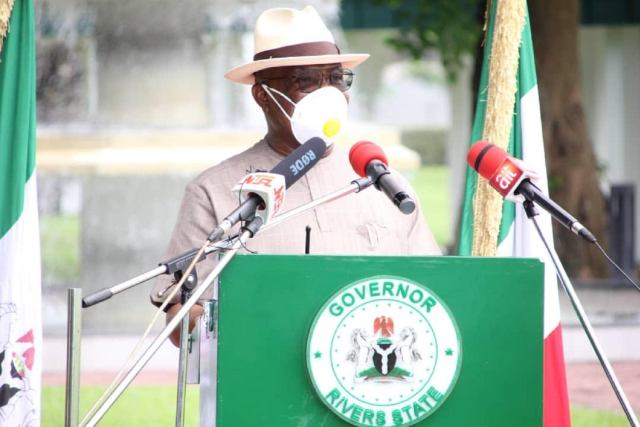 GOVERNOR Nyesom Wike has ordered the prosecution of 14 persons who moved cattle from Adamawa State into Port Harcourt in breach of Rivers State borders closure and lockdown of Port Harcourt and Obio Akpor Local Government Areas in the fight against Coronavirus.

Wike also ordered auction of the cattle and the two trucks in which they were being conveyed after intercepting them at Rumuigbo, Obio Akpor LGA in the wee hours of Friday.

One of those arrested, Ahmed Aliyu, who said they were engaged from Adamawa to bring in the cattle to the new slaughter in Oyigbo further claimed they paid N1500 to security agents to breach the state’s closed borders.

Wike said: “This fight has nothing to do with individuals. The law must take its course. Port Harcourt and Obio/Akpor are under lockdown and the law must be obeyed. The trailers and the cows will be auctioned tomorrow.

“You heard them saying they gave money to security agencies before they were allowed to cross the border. The owner of the cattle on the phone admitted they have fallen short of the law”

He further directed the State Ministry of Health to conduct tests on the 14 persons to ascertain their Coronavirus status.

The Governor said he got wind of their movement on intelligence gathered from “well-meaning Nigerians”, but did not confirm if the informant would get the N100,000 reward he earlier promised for whistleblowers over breach of the state Covid-19 restrictions.

Meanwhile, A Mobile Court sitting at the Covid-19 Elekahia Isolation Centre in Port Harcourt has of the lockdown imposed by Rivers State Government on Port Harcourt City and Obio/Akpor Local Government Areas (LGAs) to contain Coronavirus.

The offenders were Thursday dragged to the court by Office of the Attorney General of Rivers for alleged breach of Executive Order RVSG 06 2020 which imposes the lockdown, prohibiting human and vehicular movement in the Port Harcourt metropolis.