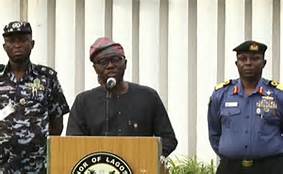 Majority people complied with the lockdown order; however, few individuals were recalcitrant to move into major highways driving as though the movement restriction order was not for them, yet, they had no reasonable destinations. They also are not among those listed to be on special duties who were exempted from the lockdown.

Some persons were even molesting the Police who were on duty, taking their photographs for reasons best known to them, even when they are not journalists. This led to arrest of some persons who defied government order.

Accordingly, Governor Babajide Sanwo-Olu of Lagos State, at a briefing  on Saturday on the efforts to combat coronavirus in the state, revealed that more than 400 vehicles have been arrested over breach of law and defiance of movement restriction order.

The governor declared: “We have reviewed the situation, we are aware. It is true that we have seen a lot of people trying to flout the rules especially when it gets to 7.00 to 8.0 pm.

“Today, we have arrested almost 400 vehicles, all yellow buses, that the Commissioner of Police reported to us and they have also been given the directives that the lockdown is 24/7.

“It is not that you are meant to restrict at any point of the day. It is 24/7 and people need to obey the rules. People need to comply fully.”

There appear to be misinterpretation of the movement restriction. In some parts of the state, people start leaving their homes, opening shops as though the lockdown has ended for the day. Some others believe it starts from 11.00 pm till 5.00pm the following day. Some commercial bus drivers even take to the road to convey passengers.