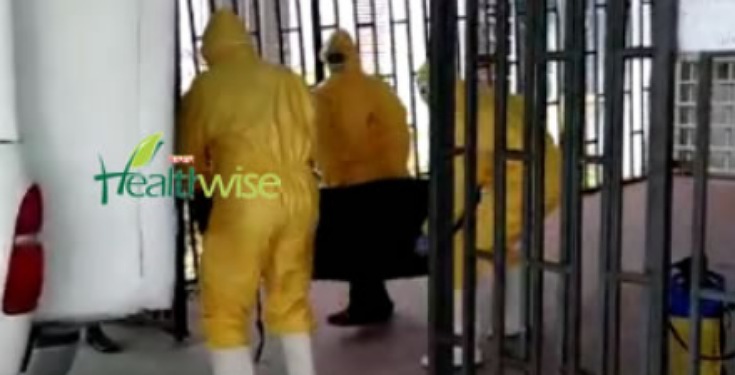 Two new deaths resulting from Coronavirus have been recorded in Nigeria – One in Lagos and the other in Edo state – bringing the total recorded Coronavirus deaths in Nigeria to 4.

The Nigeria Centre for Disease Control announced this on Twitter, writing: “Twenty new cases of #COVID19 have been reported in Nigeria; 11 in Lagos, 3 in the FCT, 3 in Edo, 2 in Osun & 1 in Ondo.

“Two new deaths have been recorded in Lagos and Edo State. As at 10:30 pm 3rd April there are 210 confirmed cases of #COVID19 reported in Nigeria.” 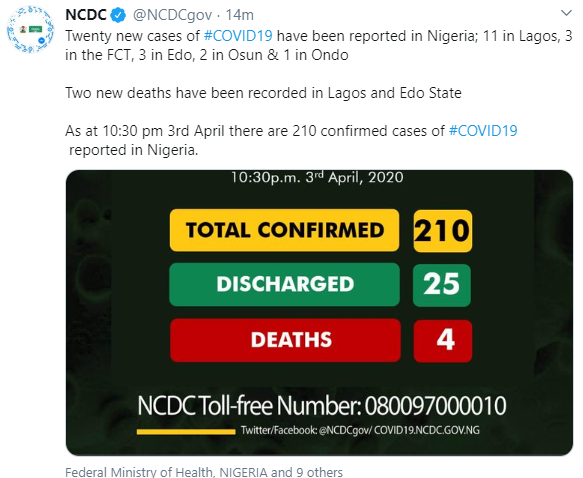 The patient who died in Lagos is a 55-year-old man. He died in the Lagos University Teaching Hospital, Idi-Araba, hours after he was admitted, according to Punch

The hospital only discovered after his death that he had Coronavirus. A Polymerase Chain Reaction (PCR) test was done on his blood posthumously and it tested positive for Coronavirus, the publication reports.

“Fingerprint antibody test was done on him, confirming his COVID-19 infection,” a source told Punch.

According to our source, the man, a 55-year-old hypertensive and diabetic patient had presented to LUTH’s emergency unit on Thursday night with “malaise, tremors, and fever.”

He was also diagnosed with acute chronic kidney disease and sepsis.

The man, who arrived at LUTH on Thursday night, April 2, did not disclose his travel history, neither did he disclose the fact that he had contact with someone who had travelled overseas.

He reportedly told the doctors that he had no history of coughs, sore throat, joint pains or diarrhoea.

When the patient first arrived at the hospital in Idi Araba, he was sent to the “spillover unit” because the hospital had run out of bed spaces. However, when he developed complications, a junior doctor at the Accident & Emergency Unit reviewed his case and notified the Senior Registrar of his suspicion.

The source told the publication: “After the Senior Registrar reviewed his case and confronted him with their findings, the man revealed the true story about his travels and his fear that he might have contracted COVID-19.

“He confessed that he had been coughing and that he had returned from Holland two weeks ago, where he had gone for follow-up treatment after a renal transplant he also had there.”

When confronted after the man’s death, his family members said they withheld the information about his likely COVID-19 infection because they were afraid that LUTH would reject him.