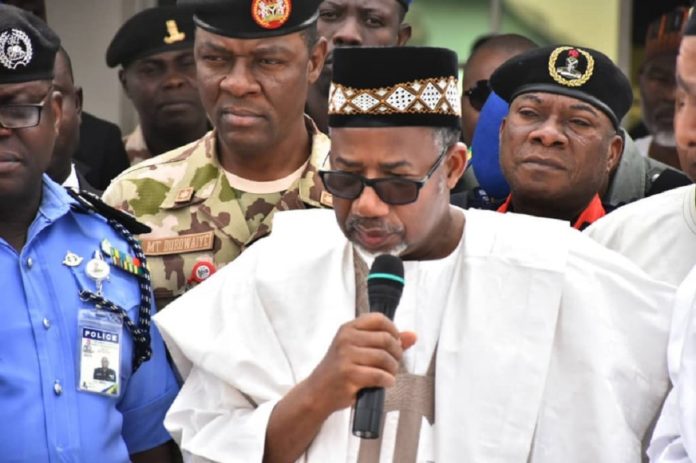 Governor Bala Mohammed Abdulkadir of Bauchi has been
commended by the National President Zaar Development Association (ZDA) Nation
Wide Engineer Isuwa Galla for appointing Zaar sons and daughters to serve as
members of his kitchen cabinet.

The President said, “As a people we sincerely want to
say Thank you for finding us worthy of myriads of appointment within the
cubicle of your administration to serve as cabinet Members and head certain
parastaltals.Today a Zaarman is seated as the Caretaker chairman of Tafawa
Balewa LGA, Hon. Barrister  Kefas Magaji
and Bogoro LGA, Hon. Iliya Habila”.

He made the commendation during a courtesy visit to the
Governor in his office,

He pointed out that other appointees are Barrister Jiduana
Tula Gwamis as Commissioner of Water Resources, Honorable Hassana Arkila as
the  Executive Chairperson of BASOVCA
which is a crucial Agency in our dear state and most importantly your
excellency you’ve entrusted your Personal Security to a Zaar man by appointing
Gen. MK Yake retired as your Chief Security Adviser and Permanent Secretary
Security Government House in person of Mrs Lydia Tsamani.

He said Indeed a Zaar man now has an absolute sense of
belonging in the affairs of Bauchi State saying “Bauchi state is now back to
her people and the euphoria you’ve cause us is indeed well acknowledged and
appreciate”. he

Engineer Galla said,
“in less than a year into assuming office we believed through your
dealings that the man we voted for is God sent, as we have never been perturbed
about your ability to deliver and citizen’s of our state are beginning see
their prayers and yearnings been answered”.

“Your administration is indeed doing more than enough
to enhance the well being of the good people of Bauchi State but I want to
bring exclusively to your notice for kind consideration the yearnings of the
Zaar Community which are basically development of the land and her people as it
remains the Cardinal driving force of the Zaar (Sayawa) Development
Association”.

According to him, Zaar Community has suffered so much
marginalization and injustice overtime ,and they are been treated as second
Class citizens in their State either because of their Faith or ethnicity. But
since his emergence the Zaarman has been given a sense of belonging and they
can proudly say they are now one and united people.

Explained stated that “Our region has been
characterized by violence and crisis- for over two decades our people have been
attacked in there farms and homes, leading to desertion of some of our
communities by their residence. As I speaks, your Excellency some of our
communities have been rusticated with indigenes members of such communities
seeking refuge in other places”.

The President said without any gainsay the effect of crisis
in their region speaks for itself as number of youth have engaged in drug
abuse, theft, vandalization of public properties,  thuggery, unnecessary violence and other
social vices due to the effect of those crisis, while  some have lost there shops and sources of
livelihood  and it does not speak well of
for them as a people.

“We feel there is a need to create some schemes and
skills acquisition center to help curtail the further spread of this menace. As
it is believed that an idle man is the devils workshop. recently a Peace
Process was initiated by Barrister Kefas Magaji, the CTC Chairman of Tafawa
Balewa LGA and ZDA under my watch has keyed into it. I most also applaud the
peace we’ve enjoyed since your emergence as Governor, as we are hopefull of a
promising future”.

He further appreciates
Rt. Honorable Yakubu Dogara who used the instrumentally of his office as
Speaker of the 8th Assembly to bring developmental project to his constituency
which in turn their communities enjoyed some.

“But as i speak to you even some of the project he
brought are in a Sorry stage as the previous administration were reluctant in
accepting such projects and putting it in shape. More than Fifty Primary Health
Care are laying down idle and deteriorating daily, of recent we heard to
contribute our hard earned money to employ some staffs temporary and also
equipped those places with drugs in our effort to putting few among others to
function.The General Hospital Tafawa Balewa too is begging for your attention
to come back alive..

We also had to take absolute responsibility to watch over
certain projects such as buildings, solar panels  and boreholes to avoid vandalization.  So many Road projects have been abandoned
within our communities.

Isuwa Galla also commended
effort made by Professor Suleiman Elias Bogoro for making sure the  ATBU center in Tafawa Balewa is well
equipped, commissioned and handed over to the management, and also in his
effort to seeing that the same Campus is subsequently handed over for the
siting of the proposed Nigerian Air force University.

“I wish to on behalf of the Entire Zaar people seek for
your indulgence to support such a giant stride to it’s full actualization and
take off, as we believe it will not only harmonize our region but will also
attract massive development in our State. At some point Education was gradually
going extinct in our state but with your emergence it is today out of coma. As
i speak to you the College of Education in Bogoro is active with a great number
of our Children learning there and also the NOUN study center in Bogoro is also
functioning”.

The prayer of Our people is that we want to have adequate
representation in terms of employment and empowerment, infrastructures and
means of livelihood such as basic amenities with emphasis on Water as some of
our communities still depend on Streams and rivers for drinking water.