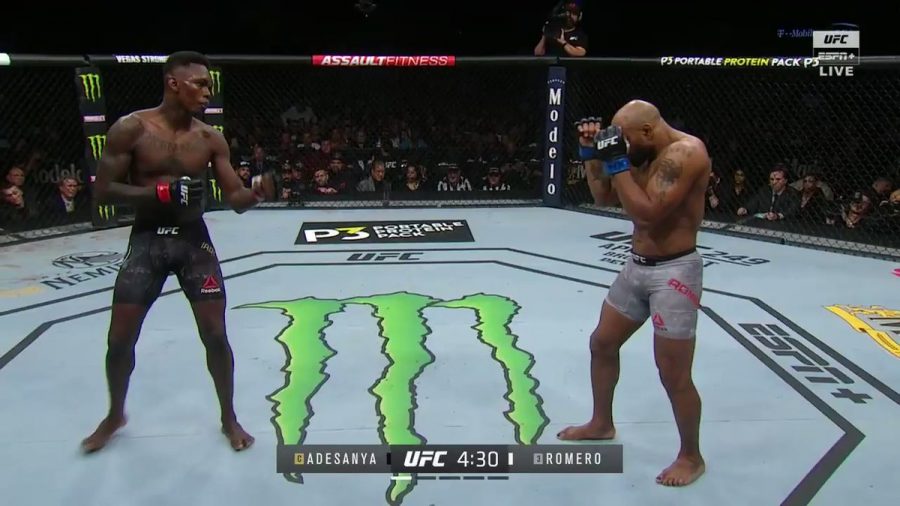 Adesanya and Romero during the 5-round fight –>

Adesanya and Romero during the 5-round fight

Nigerian-New Zealander Israel Adesanya has retained the UFC middleweight title, beating Cuban Yoel Romero at UFC 248 in the fifth round.

According to the report by stuff.co.nz, the first round was as cagey as they come, with the two fighters dancing around each other inside the Octagon.

“There were only seven strikes, with Romero landing four to Adesanya’s three, including a blow above the Kiwi’s left eye.

“Romero landed another big shot early in the second round, where the duo kept a close eye on each other.

“In the third, Adesanya began to land some big blows of his own, mainly kicks, with the crowd in Las Vegs expressing displeasure at the overall lack of action.

“As the fourth round began, the referee told both fighters: “You’ve got to give the judges something to score”.

“The fight was stopped midway through the fourth, after Adesanya poked Romero in the eye, prompting an inspection by a doctor.

“Adesanya was using kicks to Romero’s right leg to great effect, wearing down the explosive Cuban heading into the fifth and final round”.

Adesanya drove himself into the Las Vegas venue in a Porsche; then holding a horse whisk, he was led him into the venue with two ladies, carrying flower petals.

Israel Adesanya’s entrances are awesome. Fuck anyone that hates on them. #UFC248 pic.twitter.com/F4JkdhSeAz

The 30-year-old Adesanya (18-0), from Nigeria, didn’t get his first title fight despite a gaudy record until UFC 236 in April 2019 when he beat Kelvin Gastelum by unanimous decision for the interim middleweight crown. Adesanya next fought then-champion Robert Whittaker at UFC 243 and knocked him out in the second round so this is technically Adesanya’s first title defense.

Romero, a former member of the Cuban Olympic wrestling team who now calls Miami home, is ranked third in the division behind Whittaker and Paulo Costa. The 42-year-old “Soldier of God” has lost three of his past four outings – two of them against Whittaker. Romero comes off a unanimous decision defeat to Costa at UFC 241. Even though Romero is a former wrestler, he has never won a fight by submission, either; 11 of his victories are by KO/TKO.

Costa was originally expected to fight Adesanya, but Costa had surgery in October on an injured biceps so that ruled him out. Costa sat cageside during Adesanya’s victory over Whittaker. Almost surely Adesanya-Costa will be next assuming the champion wins Saturday. He is -285 with Romero at +225.