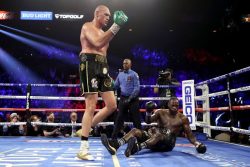 Twitter is currently celebrating Tyson fury’s victory over Deonter Wilder, this has got plenty Nigerians reacting to the new WBC Champion, Tyson fury after he flawlessly beat Deonter Wilder earlier today in the UK.

Among the people celebrating fury’s victory is a popular Nigerian comedian, Akpororo and his fans.

As Tyson dedicated his victory to Jesus Christ.

Some fans of the Comedian asked fury a rather hilarious question that goes thus: so you know Jesus?