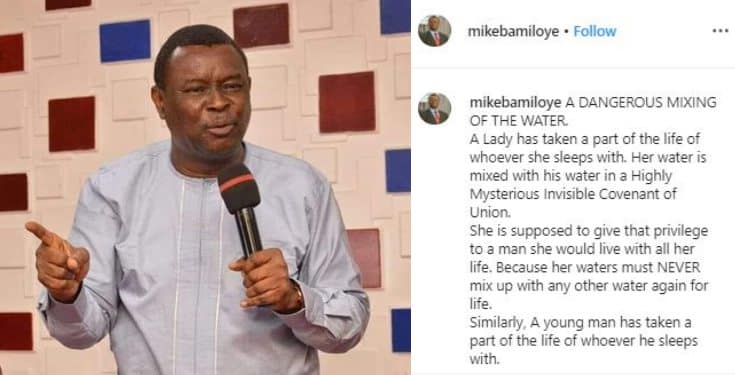 Popular Clergyman, Mike Bamiloye has revealed that having multiple sexual partners could result in one ending up with generational curses. Bamiloye stated this in a post he shared on Instagram.

According to the clergyman, many men and women have shared in the generational curses and foundational complexities of persons they had sexual agreement with in the past as a result of their inordinate sexual desires.

A DANGEROUS MIXING OF THE WATER.

A Lady has taken a part of the life of whoever she sleeps with. Her water is mixed with his water in a Highly Mysterious Invisible Covenant of Union.

She is supposed to give that privilege to a man she would live with all her life. Because her waters must NEVER mix up with any other water again for life.

Similarly, A young man has taken a part of the life of whoever he sleeps with.

PART OF HER DWELLS IN HIM AND PART OF HIM LIVES IN HER. THE INTRA-TRANSITION HAPPENS WHEN THE SEXUAL UNION IS GOING ON….And all the Contractual Agreement is signed within the 5 mins or 10mins of the PLEASURABLE MADNESS.

Now…the most frightening issue is this: Some ladies can not actually pin down the number of men they have shared their lives and body with.

THEY LIVE COMPLEX LIVES. Because, they had slept and shared the lives and bodies with all the accompanying generational and family complexities and curses of the various boys and men.

So also, some young men can not accurately give the number of the ladies they have shared their body and lives with. Some people’s destinies have been seriously distorted and badly battered beyond repairs. Stolen virtues. Torn royal apparels on beds of immoral pleasures.

In the Course of Sexual Blood Covenant, many ladies and young men have shared in the generational curses and foundational complexities of persons they had sexual agreement with:

THEY HAVE BECOME ONE WITH AS MANY AS THEY HAVE HAD SEXUAL UNION WITH.

So many are living confused, complex and battered lives that have shattered beyond human repairs”.