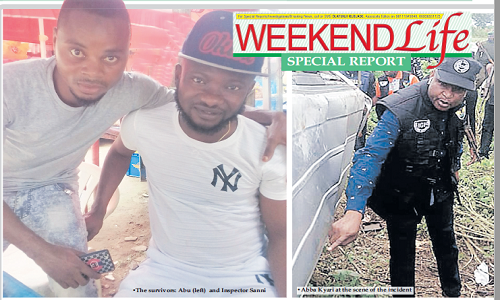 Our raw deal with killer soldiers in Taraba

Two of the five operatives of the Inspector General of Police Intelligence Response Team (IRT), Inspector Sanni Abib a.k.a. Osha and his team member, Abu Yunus, have revealed how they managed to escape from the IRT operation vehicle in Ibi town, Taraba State when soldiers allegedly rained bullets on the vehicle in a bid to rescue the millionaire kidnap kingpin, Hamisu Bala Wadume.

The IRT operatives had captured Wadume and were conveying him from Ibi to the police headquarters in Jalingo when some soldiers attacked their vehicle, killing three police officers and one civilian while they also left other occupants of the vehicle with bullet wounds, after which they unshackled Wadume and set him free.

Narrating how he managed to escape being shot dead by the soldiers allegedly on a mission to rescue Wadume, who was believed to be very close to some of the soldiers, one of the lucky survivors of the attack, Inspector Abib, said: “I am the team leader of the IRT operatives who went to Ibi, Taraba State to arrest the kidnap kingpin Wadume. I was face to face with death but I conquered by the grace of God Almighty.

“We had first gone to Jalingo, Kari Area Command to process our documents, after which we went to Ibi Police Station and booked our movement. There is only one road that leads into Ibi town, and it is the same road one must take to get out of it.

“When we arrested the kidnap suspect Wadume, we handcuffed him and also chained his legs, put him inside our IRT operation vehicle and started our journey back to the police headquarters when the soldiers started attacking us.

“At the time we left Ibi town and were about to cross the three checkpoints, we did not expect that the soldiers would attack us. So, it was a big surprise, because they were aware of our official movement and our mission.

“After due documentation, we went and arrested Wadume. And as we headed back to the police headquarters, we passed the first army checkpoint and the second checkpoint manned by mobile policemen. But as we were getting near the last army checkpoint, we noticed that one Picnic vehicle was following us, and at a point, they started firing at our vehicle.

“We were all the more surprised when we noticed that the occupants of the vehicle were soldiers. And as we were still wondering about the attack by soldiers in a Picnic vehicle, another vehicle, a Hilux GPMP with soldiers carrying machine guns, overtook the Picnic vehicle and started firing at our vehicle.

“The way they sprayed bullets made our vehicle to summersault three or four times. To get out of our bullet-riddled vehicle which had tumbled, I had to use my leg to break the window glass. Seeing that the soldiers had not stopped firing, I crawled some distance before I dashed into a nearby bush. But on noticing that about three soldiers were pursuing us and firing at the same time, I jumped into a river and remained in it for about 30 minutes. When they could not see me, they went back to their checkpoint with their AK47 rifles and I came out of the river and continued my escape bid.

“I walked carefully through the bush, knowing that it could contain various traps and dangerous snakes.

“When I got to Ibi Police Station, I heaved a sigh of safety, then I fell down any fainted. When I rediscovered myself, I discovered that I had bullets brushes on my right leg and in the back. The officers at the police station rushed me to the general hospital in Ibi for medical attention.

“It was at the hospital that I met my other colleagues who had also escaped from the bloody scene. That was where I saw Mark being operated upon to remove the bullets the soldiers had pumped into his tummy. I also met Mathias with bullet wounds on his right leg. I stayed in the hospital for five days before I was discharged and I went to Ibi Police Station from where we finally left.”

Abib described the death of his colleague, Mark, in the hospital as a particularly painful experience, saying that he wept profusely when he saw the deceased colleague’s condition before he eventually gave up the ghost.

Another survivor, Abu Yanusa, described his escape as sheer miracle.

“My survival was a miracle. The way the soldiers were firing made me to think that the bullets got me. But to God be the glory, there was no fatal wound when I got to the general hospital,” he said.

Asked how he managed to escape, he said: “It was the team leader that showed us the way when he used his leg to break the vehicle’s window glass. When he jumped out, I followed him. Even when he was crawling I followed suit. Because of persistent firing by the soldiers, crawling was the only safe way to get away from the scene as fast as possible.

“However, when we noticed that about three soldiers were pursuing us fully armed with AK47 and firing indiscriminately, we ran in different directions. As for me, I ran in the direction where I could quickly get to the main road. But my mind skipped a beat when I saw some natives with machetes and clubs advancing aggressively towards me. They surrounded me and asked me to identify myself, and I did so immediately.

“I told them how we came to arrest the suspect Wadume and how the army came to rescue him and how they fired our vehicle and wanted to kill all of us, hence our decision to run in order to save our lives.

“After explaining to them, they believed me. They said they knew Wadume as a notorious kidnapper.

“From the Area Command, I was taken to the hospital where I met my team leader, Inspector Abib and others who had escaped. I also saw Mark who they were operating on as a result of the bullets in his tummy.”

The suspected kidnapper, Hamisu Bala Wadume, had confessed his murderous escape from the grip of the operatives of Intelligence Response Team on August 6 in  Ibi, Taraba State. Speaking in Hausa language, Wadume said he escaped from the custody of IRT operatives when they came under attack from soldiers attached to Battalion 93, Takum, Taraba State, as they conveyed him from the scene of his arrest.

The Army later explained that the soldiers attacked the IRT operatives because they mistook them for criminals, following a distress call they had received. In the said attack, three policemen and a civilian were killed, while five other operatives sustained injuries.

Wadume was, however, re-arrested on the eve of Monday, August 19, as revealed by the Force Public Relations Officer, Mr. Frank Mba, a Deputy Commissioner of Police.

In his confessions, Wadume, virtually implicated soldiers at the Battalion 93, Takum, Taraba State over his escape from the IRT custody. He said the soldiers were the ones who set him free by cutting his leg chains and handcuffs at an army base and he went home a free man before he was rearrested by IRT operatives in Kano.

The kidnap suspect, who was alleged to have received millions of naira as ransom from his victims, had confessed thus:  “My name is Hamisu Bala Wadume. The police came to arrest me. When they arrested me, the army chased after them and opened fire. From there, they (soldiers) took me to their headquarters, and cut off my handcuffs. I went back to my house and the police came to re-arrest me.”

However, it is still not clear when the army authority will release the findings of the panel they appointed to look into the matter towards proper trial of those indicted in the ugly incident.