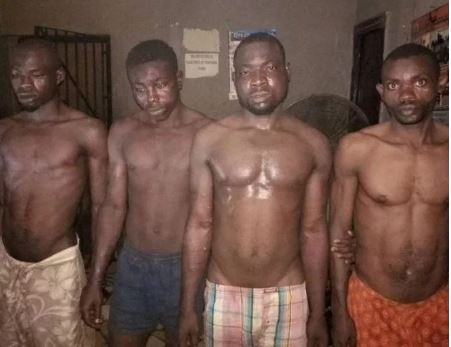 The Edo Command of the Nigerian Police says it has arrested four armed robbery and kidnap suspects in the state.

The Command’s Spokesman, DSP Chidi Nwabuzor, said in a statement that the suspects were arrested based on credible intelligence through the Directorate of State Security (DSS).

He said that the office of the IGP had alerted that the suspects were planning coordinated attacks against police formations in the state.

He said that based on this, Edo Commissioner of Police, CP Mohammed DanMallam, directed the tactical team of the command to go after the suspects.

He further said that a robust raiding, coding and search was conducted within Auchi axis of the state which led to the arrest of the suspects on Friday.

He said some items recovered from the suspects included a vehicle, one Pump Action, two locally made guns, 20 live cartridges, charms, two face masks and a pair of police mobile force uniform.

He appealed to members of the public to be vigilant and always be at alert about suspicious movement and report same to the police.