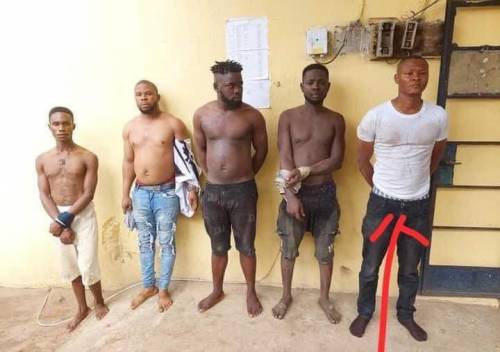 According to SaharaReporters, the Imo State Police Command has released a father of one, Casmir Ibegbulem, 40 years old, who was wrongly arrested and paraded as one of the unknown gunmen disturbing the state after SaharaReporters did a report for him and others.

SaharaReporters on Monday reported that Ibegbulem, a father of one and expectant father of another is a “Permit Holder” staff member of an oil company on Bonny Island in Bayelsa State and a native of Ogwa Community in Mbaitoli, Imo State.

Police patrol personnel had pounced on him at gunpoint and arrested him.

“He was paraded same evening alongside four others. Ibegbulem is married to Onyekachi who is seven months pregnant,” SaharaReporters had reported on Monday.

“Ibegbulem, who was arrested by Imo State Police Command as one of the #UGM (Unknown Gunmen), has been released. He was transferred to Force Headquarters, Abuja two days after our online protest. Currently, I don’t know the whereabouts of others in this picture. Thanks to @PoliceNG_CRU,” he tweeted.

SaharaReporters had revealed that the May 30 Biafran Remembrance Day which the Indigenous People of Biafra (IPOB) marked with a sit-at-home order for all South-Easterners was held with several arrests of residents who were victims of police and military raids in detention.

SaharaReporters had profiled some of the residents who were raided by the police and the army, and labelled and paraded as belonging to IPOB or its militant arm, the Eastern Security Network.

A report by the International Society for Civil Liberties and Rule of Law, a civil society and research group had detailed some of the accounts of these victims of army and police harassment and provided their photographs exclusively also to SaharaReporters.

The civil society noted that in the past one week, “not less than 30 open and secret killings by soldiers and police had taken place with most in Imo State where scores of corpses have been freshly traced to the mortuaries of the government medical centres.”

“In all these, we have received over 100 phone calls and messages from members of the public testifying in favour of the abducted and slain citizens named above. Intersociety hereby calls on the Nigeria Police Force and Nigerian Army to immediately and unconditionally release all the citizens arrested illegally.

“We urge them to desist from perpetration of frame-ups and trumped up allegations or charges, abductions and disappearances, extrajudicial killings and other forms of genocidal operations going on in the South-East,” Intersociety had added.