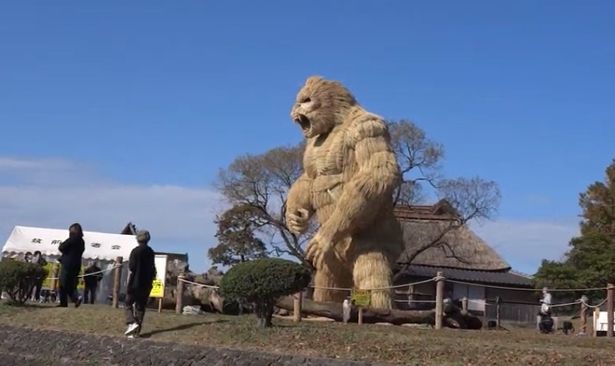 According to a report by Daily Star UK, some really superstitious locals in a Japanese village have constructed a giant Gorilla to scare off COVID-19.

They actually built the gorilla out of steel and straw in a desperate big to ward off the coronavirus.

Villagers in Chikuzen, Fukuoka Prefecture in the south west of Japan spent two months building the life-like statue – which has eyes which glow red in the night and stands at an impressive 23 feet tall.

The structure has been called ‘Giant Straw Scarecrow Gorilla: Proud Gorilla 2020’ and is due to stand watch over the town until the end of the month.

After being completed in December 2020, the giant statue has become something of a local attraction – pulling in crowds who gather around to inspect it; which might not help in the interests of reducing Covid-19 transmissions.

Japan Today reports that locals decided to build the structure in an attempt to ward off the pandemic.

The publication reports: “The likeness of a gorilla was chosen as a symbol of power and strength in the face of the prolonged coronavirus pandemic.” 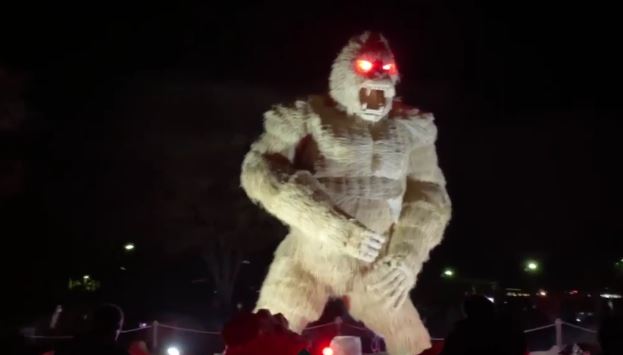 While adding that the “ape’s lifelike hair was made from rice straw layered on top of a steel frame” and was constructed as an: “idol to worship”.
Proud Gorilla has been regarded as a new offering of hope after Japanese nationals spent the past year worshiping the legend of Amabie – with their prayers falling on deaf ears.

Amabie is an ancient Japanese ‘yokai’ – a type of legendary monster that can bring good fortune or cause chaos.

Amabie herself is a mermaid-like creature with long flowing dark hair, a beak, glowing green scales and three fin-like legs.

First encountered in the 1800s, she became popular again last year for being a deity capable of warding off plagues.

The original legend saw Amabie encountered by a government official in 1846 – with the fish-creature warning that a pandemic would ravage Japan unless her image was drawn and show to as many people as possible.

The story – and an accompanying sketch – were subsequently published in national newspapers to spread the word and desperately fulfil the requirement to repeal the prophesied disease.

With the emergence of Covid-19 as a global pandemic last year, Amabie became popular once more – with Japanese businesses and members of the public frantically sharing her image in the hopes of turning fortunes around in the fight agains the pandemic.

However, with seven of Japan’s most populous prefectures declaring a state of emergency again in recent weeks as Covid-19 cases flare once more, she has fallen out of favour and hopes are now pinned on the 7 meter high Gorilla.