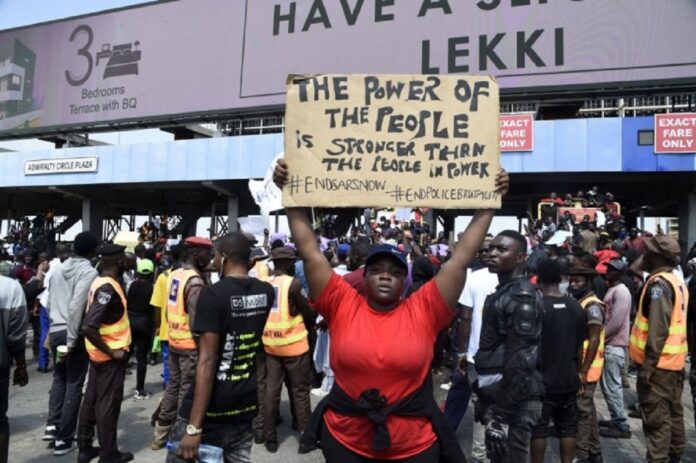 Nigeria will Burn if You Use Force on #EndSARS Protesters – CNPP Warns Police, Army

Conference of Nigeria Political Parties (CNPP) has warned that there will be catastrophic consequences if the Police and Nigerian military allow themselves to be pushed into using force to suppress the ongoing #EndSARS protesters.

The CNPP in a statement signed by its Secretary General, Chief Willy Ezugwu warned that “Nigeria will born if the police and military authorities allow themselves to be used by selfish government officials who have demonstrated unprecedented level of insensitivity and shielded president Muhammadu Buhari from knowing the reality of things.”

According to the umbrella body of all registered political parties and political associations in the country, “the situation is worsening because our President has locked up himself in the Presidential Villa while those who elected him are on the streets protesting against bad governance and police reform.”

Recalling that “during the build up to the planned labour unions strike and after the eventual disappointment by the labour unions, the CNPP continued to reach out to civil society groups across the country on the need to arrest the continued maladministration in the country.

“But at the peak of the consultations and mobilisation, the SARS attack that sparked the rise of the #EndSARS Movement occurred.

“Today, the federal government, through its intelligence networks, should have known that young people across the country, on their own accord, opted to take their own destiny in their own hands after obvious sellout and betrayal by labour unions in the country.

“As the labour unions lost the trust of citizens, the youths are raising their funds to support each other while the protests lasts, with some Nigerian celebrities supporting them with food and water.

“At the momentum of the widespread protests, any attempt to use force to disperse these demonstrators will be disastrous for the country and may lead to a total collapse of the already collapsing Nigerian economy.

“We therefore warn the Nigerian military and the Police authorities not to allow selfish politicians use them to destroy the country.

“Unfortunately, the presidency and the ruling All Progressives Congress (APC) did not, as expected, heed earlier advice by CNPP that there was urgent need for President Muhammadu Buhari to address the nation to calm ruffled nerves of the protesting youths.

“As usual, the presidency saw such advice as an attack from the opposition, even though it was based on intelligence within the CNPP network of impending total shutdown of the country, which a fatherly words of assurances from Mr. President would have prevented.

“We saw it coming and today, we are all living witnesses to the growing agitations against bad governance both at home and abroad.

“The APC and the Presidency should know that the worst is yet to come. It’s not the time to be adamant and insensitive. #EndSARS is a movement of the people which no Pharaoh can stop.

“No government is above the people; the people gives power to those in government and all government officials at all levels, including security operatives, must immediately realise that the Nigerian people are their employers and treat them as such.

“Nobody can tell his or her employer to go to hell without dire consequences. For the umpteenth time Mr. President, it’s time to address Nigerians.  A word is enough for the wise”, the CNPP stated.