Health workers under the auspices of the Joint Health Sector Unions, JOHESU, has suspended the seven-day warning strike issued to the Federal Government notwithstanding government’s failure to meet their demands.

The Union also directed all its members across the country to resume work from Monday, September 22.

National Chairman, of JOHESU Biobelemoye Josiah, gave the directive in a statement on Sunday.

According to him, the Federal Government instead of calling for dialogue to resolve the trade dispute has resorted to intimidation and blackmail.

“JOHESU will continue to use all legitimate means to defend the rights and demands for the welfare of its members in the health sector.

“Nigerians should bear us witness that JOHESU has shown high patriotism by demanding that public health system in Nigeria is sustained and adequately financed for effective, efficient and affordable healthcare delivery.

“In view of the above and in line with the resolution of the Expanded NEC meeting held physically and virtually today, Sunday 20, September, 2020, I hereby declare that the 7 days warning strike is suspended.

“All our members are directed to resume work by Monday, 21 September, 2020 while awaiting further directives.”

The Union had on September 7, issued a  warning to the Federal Government that it will proceed on a nationwide strike if they don’t get the appropriate payment for their COVID-19 inducement allowance amongst other demands by midnight of September 13.

Due to the failure on the part of the government to meet their demands, the union on September 13, proceeded on the strike, an action which they decided to review while they await response from the government. 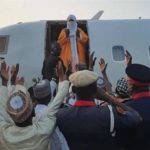