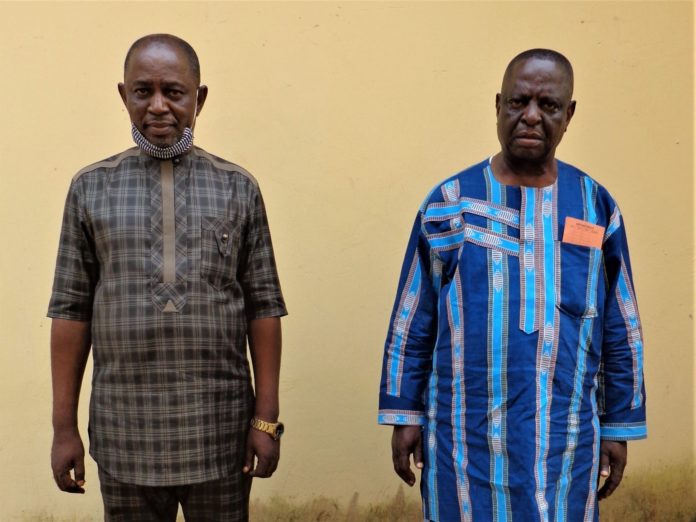 One of the charges read: “That you Nnaji George and Nnaji Benedict, sometime in February, 2016 in Enugu, within the jurisdiction of this court, with intent to defraud, obtained the sum of N5,500,000 (Five million, Five hundred thousand naira) through the account number: 2015618801 in the name of Nnaji Benedict and thereby committed an offence contrary to Section 8(a) of the Advance Fee Fraud and Other Related Offences Act 2006 and punishable under Section 1(3) of the same Act.”

The defendants pleaded not guilty to the charges, prompting prosecution counsel, Innocent Mbachie to ask the court for a commencement date for their trial and for them to be remanded in prison custody.

The judge, upon the application of the defence lawyer, admitted the defendants to bail in the sum of N10,000,000 (Ten million Naira) each and  two sureties in like sum, who must swear to an affidavit of means. The defendants and their sureties must also deposit their recent passport photographs with the court.

The duo was alleged to have misrepresented themselves to the petitioner as real owners of some plots of land, situated on Akanu Ibiam International Airport extension,  by claiming that the plots are part of their family land.

In other to cover their tracks, they allegedly forged a layout plan and allocation papers of the area which they passed off as emanating from Enugu State Development Authority and Enugu East Local Government.

The petitioner reported that it was when he started work on the land that he was accosted by officials of the Enugu East Local Government Area and was  told that the land was acquired seven years ago, by  Government for the purpose of upgrading the airport to international status.

The matter was adjourned till October 20, 2020 for trial.

Similarly, the Enugu Zonal Office of the Commission arraigned one Ndubueze Igwume before the same judge on two-count charge, bordering on obtaining money by false pretence and impersonation, to which he pleaded not guilty.

One of the charges read: “That you Ndubueze Igwume (m), aged 41,on or about the 10th day of January 2020, in Enugu within the jurisdiction of this court with the intent to obtain money for yourself by false pretence, fraudulently impersonated one Jumah Eisa Al Mahannadi and  thereby committed an offence contrary to Section 22(3)(b) of  the Cyber Crimes (Prohibition, Prevention etc) Act 2015 and punishable under Section 22(4) of the same Act.”

He pleaded not guilty to the charges.  Based on his plea, EFCC counsel, S.A Uhuegbulam asked the court for a commencement date of trial and for the defendant to be remanded in prison custody.

Justice Buba upon an application by the defence lawyer, granted Igwume bail in the sum of N10million (Ten million Naira) with a surety in like sum, who must be resident within the jurisdiction of the court and swear to an affidavit of means.

He ordered the remand of the defendant in the Nigeria Correctional  Service pending the perfection of his bail conditions and adjourned the matter till October 21,2020.