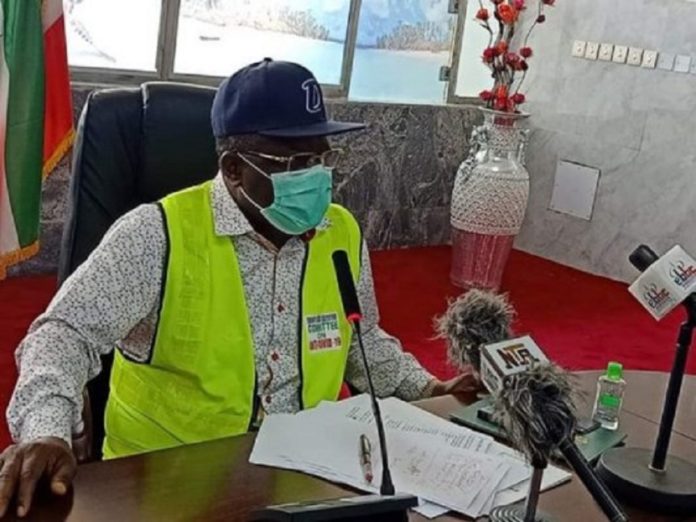 Since the former Secretary to Ebonyi State Government, Prof. Benard Ifeanyichukwu Odoh, invited Nigeria’s anti-graft agency, EFCC, to investigate the handling of the 2016 N2 Billion CBN Agriculture loan fund for farmers of Ebonyi State, all have not been well for Engr. David Umahi and his administration. Pitiable Engr. David Umahi who had accused Odoh of misappropriating the said fund confessed in a live broadcast that he (Engr. Umahi) was “the one who actually approved all the disbursements” of the 2016 CBN Agriculture loan fund.

Prof. Odoh’s invitation to EFCC which was backed by orders of mandamus against EFCC as well as restraint against Umahi and his government seems to overwhelm Engr. David Umahi. In Umahi’s trepidation, he has committed blunders and made fundamental but risible changes in his administration. He began with an unsuccessful capital intensive anti-Prof. Odoh resolution bonanza which ironically buoyed up Odoh’s popularity and diminished Umahi and his administration. Umahi followed this with a panic cabinet reshuffle and creation of new ministries and funny departments. Ebonyi State now has ministries of Rice Mill and Intergovernmental Affairs respectively; and five offices of Special Assistants to the Governor on Lot 1, Lot 2, Lot 3, Lot 4 and Lot 5 of Abakaliki International Market respectively.

Engr. David Umahi’s desperation is understandable. A governor driven by high propensity for primitive wealth acquisition into personalization of his government and extreme denial of Ebonyi bureaucracy of living wages, lawful allowances, remunerative promotions and even gratuity and pension is expected to panic over the impending visit of the anti-graft agency. Engr. David Umahi is also worried that EFCC’s visit to his domain offers the righteously indignant Ebonyi workers the opportunity to “whistle-blow” the high profile corruption which characterize his administration

So far, leaked documents cast thick doubts over the handling of a total of about N22.270 Billion which were dedicated funds received by Engr. David Umahi’s administration on behalf of Ebonyi State. These include the Paris Club funds amounting to N12.770 Billion which Umahi received in two tranches of N7.662 Billion and N5.108 Billion. Others include the 2016 N2 Billion CBN Agriculture loan fund for Ebonyi farmers; the N3 Billion Anchor borrowers loan; and another N3 Billion Commercial Agriculture Credit loan which was obtained last November 2019. Prof. Odoh’s reaction to Umahi’s malicious allegation has exposed the hypocrisy of Umahi’s Agricultural Revolution programme. The only time Ebonyi farmers received loans and Agricultural inputs was in the 2016 farming season when Prof. Odoh co-chaired Ebonyi State Executive Council Committee on the 2016 N2 Billion CBN Agriculture loan fund. In the succeeding farming seasons, Umahi hyped his Agricultural programme on media without releasing funds and farm inputs to Ebonyi farmers. Even as the 2020 farming season is winding up, no farmer in Ebonyi State has received either fund or Agricultural input from Umahi’s administration. Hence, the scarcity and high cost of food; and hunger in Ebonyi State as stated by the National Bureau of Statistics, NBS, in its report published in the Premium Times of 17th July, 2020. A 25 kg bag of rice which sold for N4,000.00k now sells for N12,000.00k in Ebonyi State! In his kleptomaniac administration, the Paris Club funds which the FG released to States for adequate and prompt remuneration of workers were not spared. Ebonyi workers and retirees live in despondence and abject poverty due to poor remunerations, abolition of promotion and other allowances and even gratuities. These are vindications for the National Bureau of Statistics which ranked Ebonyi State as the third poorest State in Nigeria.

Besides the misappropriation of the CBN Agriculture loan funds and the Paris Club funds, Umahi has run the education sector in Ebonyi State aground. Squalidness and lack of teachers characterize majority of Ebonyi State schools. The $3 Million dollars Better Education Service Delivery for All, BESDA, fund meant for the education of out-of-school children disappeared into underground cash vaults in Umunaga Uburu. Not one out-of-school child is benefitting from the programme which is hardly mentioned in Ebonyi State. Ebonyi Overseas Scholarship Programme which began in 1999 was arbitrarily terminated by Umahi even when his children study in high profile foreign universities. Consequently, Ebonyi State is the poorest, hungriest and most educationally-disadvantaged State in the Southeast with the lowest life-expectancy of 48 years and the highest number of out-of-school children.

To curb the unabating leakages of documentary evidences of the humongous corruption in Ebonyi State ahead of EFCC’s visit, the governor reshuffled his cabinet recently and brought back the disgraced former Accountant-General, Queen Agwu. Agwu was the nemesis of two non-pliable former Ebonyi State Commissioners for Finance, Dr. Dennis Ekumankama and Dr. Obinna Nwachukwu who were respectively dropped by Umahi because they refused to kowtow to his incredible appetite for unearned money. To continue the governor’s thieving spree, Agwu, the then Accountant-General transformed into Umahi’s hatchet woman, usurped the duties of the Commissioner for Finance and took the diversion of humongous funds from Ebonyi State Government coffers to the private underground cash vault in Umunaga Uburu to the pinnacle. Agwu was later removed from office in 2019 after she was caught by Umahi with N180 Million cash illegally withdrawn from the UBA account of Ebonyi State Government. To prevent Agwu from cooperating with EFCC, Umahi did not prosecute her for stealing and even had to re-engage her as Chief of Staff at this perilious time. To perfect the concealment of facts from EFCC, the governor’s younger brother, Orlando Nweze, took over as Commissioner for Finance. Engr. David Umahi has gone further to fake Covid-19 infection for himself and his aides in order to postpone the evil day which the anti-graft agency’s investigation has become for him. Both the announcement of Umahi and his aides’ contraction of the virus which inadvertently gave a time for their recovery; and a leaked video clip of Engr. Umahi in boisterous banter with his aides two days after the virus infection fuel Ebonyi people’s suspicion that what the governor and his aides were suffering from was “Covid-Corruption” and not Covid-19! It is doubtful how these could save Umahi and his administration from the EFCC’s sledgehammer given available e-transaction records and Ebonyi civil servants and dedicated Non-Governmental Organizations’ poise to rat on the self-centered governor.