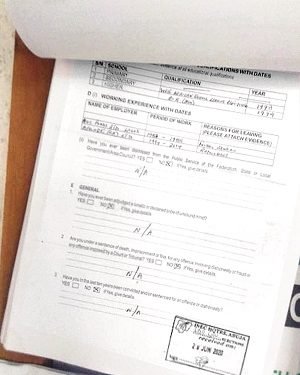 INEC displays particulars of Obaseki, others

The Independent National Electoral Commission (INEC) yesterday in Edo State displayed the forms of the governorship candidate of the Peoples Democratic Party (PDP), Governor Godwin Obaseki, and those of 13 others at its annex office, located at the former state secretariat of the PDP on Sapele Road in Benin.

Our reporter, who was earlier at the Auchi Road main office of INEC, near the Federal High Court (FHC) and the Court of Appeal, being renovated, was directed to the Sapele Road’s annex office of the electoral commission, following the renovation of the flood-prone main office.

ADVERTISEMENT
On INEC’s notice board at the annex office, Obaseki filled West African School Leaving Certificate, 1973 and Bachelor of Arts (B.A. Hons.), 1979, as his qualifications. He did not present his Higher School Certificate (HSC).

The governorship candidate of the PDP will slug it out on September 19 with the standard-bearer of the All Progressives Congress (APC), Pastor Osagie Ize-Iyamu, and others in what is popularly referred to as a rematch, to elect a new governor from November 12.

Ize-Iyamu has LLB from the University of Benin.

In 2016, Ize-Iyamu was the governorship candidate of the PDP, while Obaseki was the standard-bearer of the APC.

He had the backing of the then Edo State governor, Comrade Adams Oshiomhole, who later became the National Chairman of the governing party, before last week’s dissolution of the National Working Committee (NWC) by APC’s National Executive Committee (NEC), headed by President Muhammadu Buhari.