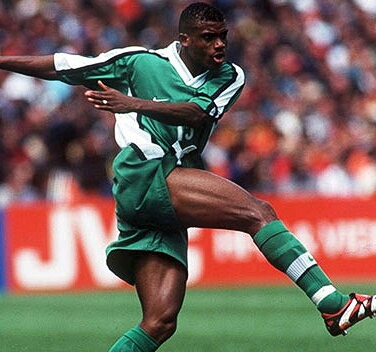 With score tied at 2-2, Oliseh netted what proved to be the winner as he volleyed home close to the edge of the Spanish 18-yard box to give Nigeria a shock 3-2 win.

Spain had taken the lead through Fernando Hierro whose free-kick went round the Eagles defensive wall.

The Eagles were back on level terms thanks to Mutiu Adepoju who headed in Garba Lawal’s corner.

In the early part of the second half Spain went 2-1 up as Raul Gonzalez stabbed home Hierro’s long pass.

The Eagles fought back and made it 2-2 after Andoni Zubizaretta fumbled Lawal’s low cross into the net before Oliseh scored the winning goal.

And recalling Oliseh’s strike, FIFA wrote on their verified Twitter handle accompanied with a short video clip of the goal: “Sunday Oliseh scored an unforgettable sizzler of a goal for Nigeria SuperEagles On This Day to stun Spain at the 1998 World Cup.”

The Eagles went on to qualify for the round of 16 with a game to spare following a 1-0 win against Bulgaria.

They lost their third group game to Paraguay 3-1 and eventually got knocked out of the tournament after losing 4-1 to Denmark.