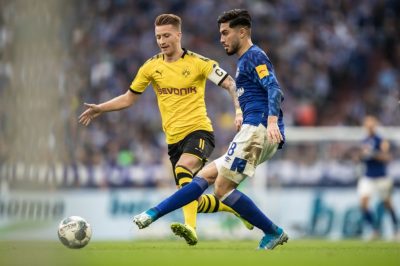 Revierderby – One Of The Fiercest Rivalries Sets Tone As Bundesliga Returns!

The Bundesliga returns on Saturday following a 66-day hiatus. While strict rules are in place to ensure safety, fans will still be able to enjoy a real footballing feast over Matchday 26, beginning with the Revierderby.

The Revierderby – ‘Mother of all Derbies’ between Borussia Dortmund and FC Schalke 04, always promises action. Spearheaded by remarkable young forwards Jadon Sancho and Erling Haaland, Dortmund will be eager to win the bragging rights and to reduce the four-point gap between themselves and leaders FC Bayern Munich. The Royal
Blues love this fixture though, and haven’t lost at the Signal Iduna Park for three years. Their 4-2 win there last season effectively ended their arch-rivals’ title ambitions.

While that will be the 96th Bundesliga Revierderby, record champions FC Bayern pay a first-ever visit to 1. FC Union Berlin on Sunday. After missing the last two games before the break, newly confirmed head coach Hansi Flick welcomes back the league’s 25-goal top scorer Robert Lewandowski. The striker is up against his former Dortmund teammate Neven Subotic at the Stadion an der Alten Försterei as the Bundesliga debutants look to stun another of the league’s big boys.

A point further off the pace in third, UEFA Champions League quarter-finalists RB Leipzig need to get their domestic campaign back on track after a pair of draws saw them lose ground in the title race. Timo Werner is hot on the heels of Lewandowski but has just three league goals in 2020. He has more Bundesliga goals against SC Freiburg (10) than against any other team, yet the visitors are no pushover this season and resume play just outside the European places. They also have influential left-back Christian Günter fit again, with the break meaning he missed no games.

Long-time leaders Borussia Mönchengladbach also remain in the title hunt on the back of their rearranged derby win over 1. FC Köln. It got the Foals back into a gallop and they travel to the Eagles of Eintracht Frankfurt who are struggling to soar to the levels of recent years. They will be hoping the break has allowed them to reset on the back of some chastening defeats.

There’s a true relegation six-pointer on offer as SC Paderborn 07 head to Fortuna Düsseldorf with, well, just six points between the bottom side and their hosts in the play-off position. Steffen Baumgart’s troops will stick to their approach and attack in their battle against the drop, but despite the long-term absence of USA goalkeeper Zack Steffen, Düsseldorf have enjoyed a change of fortune under new
coach Uwe Rösler. 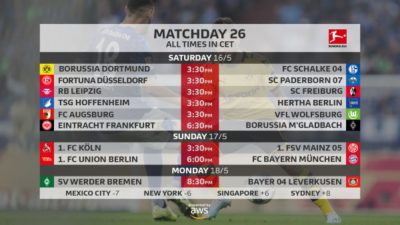 Heiko Herrlich has had to wait over two months for his first game in charge of FC Augsburg since succeeding Martin Schmidt after Matchday 25. The 1995 Bundesliga top scorer takes over a side two places clear of the play-off position and will face off against a VfL Wolfsburg outfit enjoying a steady campaign and on the threshold of European qualification. Both teams boast 11-goal top scorers in Florian Niederlechner and Wout Weghorst, respectively, but the Wolves will have to arrange their pack without the suspended Dutchman.

Another new man in the dugout for the resumption is Bruno Labbadia, who is the fourth person to take charge of Hertha Berlin this season. A veteran of the Bundesliga coaching scene and specialist in relegation fights, he’s charged with steadying the Hertha Berlin ship led by dynamic duo Matheus Cunha and Krzysztof Piatek, beginning away at TSG 1899 Hoffenheim. The Sinsheimers haven’t lost to the Old Lady since November 2015 and could move up to sixth if that run continues.

1. FC Köln missed out on local bragging rights in their last game, but under Markus Gisdol the Bundesliga 2 champions have raced up the table to the comfort of 10th place with Jhon Cordoba enjoying a purple patch in front of goal. The Billy Goats welcome back Gisdol’s predecessor Achim Beierlorzer and his Mainz side which is sitting precariously in the last spot of guaranteed safety.

Matchday 26 concludes at the wohninvest Weserstadion on Monday night as SV Werder Bremen desperately aim to cut their four-point gap to safety. To do that, they will need to score at home for the first time since November against a Bayer 04 Leverkusen team flying high and desperate to retain their pre-break form that saw Kai Havertz become the youngest player in history to reach 30 career Bundesliga goals. 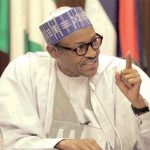