A disabled dog, named Ping Pong, is being hailed a hero after rescuing a newborn baby who was buried alive by his mother in #Thailand

The baby boy was allegedly abandoned by his 15-year-old mother as she wanted to hide her pregnancy from her parents, however, Ping Pong sniffed him out.

The life-savior dog was said to have started barking and digging in a field in Nakhon Ratchasima, before it’s owner noticed that a baby’s leg was sticking out of the earth.

The villagers then rushed the baby boy to a nearby hospital where doctors cleaned him up and declared that he was healthy.

Usa Nisaika, the dog’s owner, said that Ping Pong lost one of its legs after being hit by a car. .

Police later arrested the mother and charged her with attempted murder. She told the police that she was afraid that her father would beat her for getting pregnant. ?: ViralPress 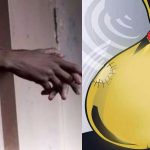