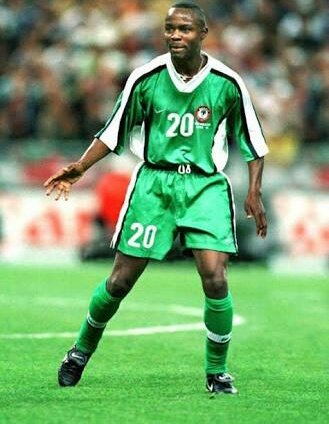 Former Nigeria international Emeka Ezeugo has revealed the role he played which saw Victor Ikpeba make the squad to the 1994 FIFA World Cup in the United States, Completesports.com reports.

Ezeugo disclosed this in an interview on Brila FM on Sunday.

Both Ezeugo and Ikpeba were included in the Eagles 22-man squad to the 1994 World Cup.

While Ezeugo only played in one game, coming on as a second half substitute in the 3-0 opening group game win against Bulgaria, Ikpeba was on the bench throughout the tournament.

Ikpeba went on to represent Nigeria at the 1998 World Cup, scoring the only goal in the 1-0 win against Bulgaria in the second group game.

“I was responsible for Victor Ikpeba going to the World Cup,” Ezeugo said.

“On the night before we travelled to the United States, Victor was told he is not going to the World Cup, that (Tijani) Babangida would replace him because the team doesn’t reflect national character, that there is no northerner in the team. This was order from above.

“Victor came to my room crying and I went to (Clemens) Westerhof’s room late at night woke him up and said ‘listen if Victor doesn’t go to the World Cup if you enter that flight from Nigeria to the United States just know I’m not the one telling you. That’s what I told him. Then I said Victor let’s go.

“Westerhof changed his clothes came to my room later and then explained to me the pressure he is getting from above. I told him ‘listen we will travel with Babangida but Victor’ s name will be in the list’. And that’s what he did, we travelled with Babangida as the 23rd player but the tournament was only for 22 players.”

The Senegal 1992 Africa Cup of Nations bronze medal winner went on to state that English-born Nigerian striker Efan Ekoku has no business going to the World Cup.

Ekoku was part of the 1994 AFCON winning side and featured in only one game which was in the 2-0 quarter-final win against Zaire (now DR Congo).

He made the squad to the United States for the World Cup but never saw one minute of action.