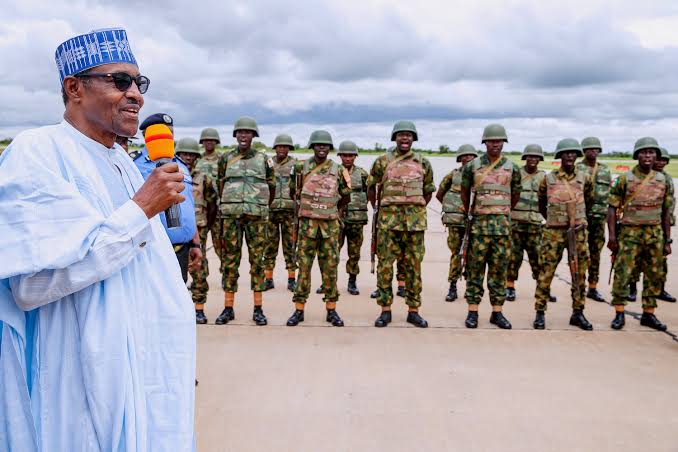 President Muhammadu Buhari has reacted to the killing of over 50 Nigerian soldiers after Boko Haram staged a deadly ambush on a moving convoy of troops in Yobe State.

On Monday, the Nigerian troops ran into an ambush as they moved into Goniri area in Yobe.

Confirming the development at a press briefing on Tuesday, Coordinator of Directorate of Defence Media Operations (DDMO), John Enenche, blamed the massacre of soldiers on locals around the area who leaked intelligence on the movement of troops to the Boko Haram.

Mr Enenche said the slain troops were on their way back from Alagarno “after a successful military operation when “suspected local informants” allegedly leaked movements of Nigerian troops to Boko Haram.

He said the terrorists used the information provided by their local collaborators to stage an ambush and shot at military logistics trucks conveying fuel and ammunition.

He said the attack on the trucks caused “massive explosions” that led to the death of 47 gallant troops of the Nigerian military.

But local witnesses who spoke to Reuters the telephone placed the death toll at between 50 and 75 people.

Reacting In a statement issued by his Senior Special Assistant on Media and Publicity, Mallam Garba Shehu, President Buhari expressed “profound grief and sorrow’’ over loss of soldiers in the ambush.

He said: “Sacrifices of our gallant patriots cannot be quantified, and their sacrifices cannot go in vain,” while commiserating with their families and those that sustained injuries.

The President said the death of every soldier causes deep pains because he knows what it means to be a soldier, and fully understands the extreme risks associated with the profession.

“Despite the tragedies and incidents, we cannot allow anarchists and mass murderers to hold the country hostage. The military should not to allow the incident to affect their morale,” the statement quoted the President as saying.

He assured that his administration will continue to motivate and equip them adequately in order to cope with the complex challenges of unconventional warfare.