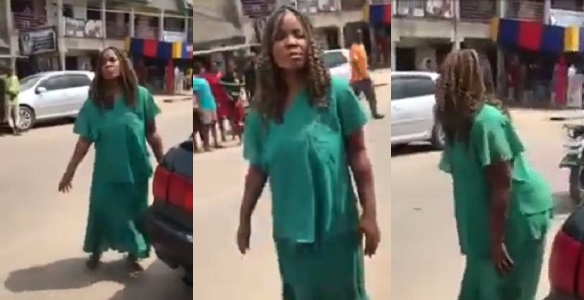 A yet-to-be identified woman has reportedly lost her sanity after she was dropped off by some men suspected to be ritualists in Sapele area of Delta State.

A resident, Sapele Oghenek said the woman is a ‘runs woman’ known for hustling at a popular joint called ‘two bottles joint’ in Koko area of Sapele.

She was seen wandering about on the streets of Kolo after alighting from a car.

Oghenek said the woman was left with money, totalling about N200,000 and an iPhone which was said to have been taken away by some street boys.

Sharing the video on his social media page, Oghenek wrote in pidgin:

“According to reports, this woman na runs woman wey dey hustle for Madam two bottles joint for Koko. Our findings show say some guys carry her go doke for Benin, and dem leave her with 200k and iPhone. Dem carry her con dump for Boyo Road Sapele, just as dem dump her nai she start to dey kolo. Boys don move with the 200k and iPhone wey dem see for her hand.

KanyiDaily had also reported that there was confusion at Badagry area of Lagos state when a young lady ran mad after spending a night with a young man identified as Solution.

According to reports, the lady had slept overnight with Solution. The next morning, she started displaying signs of insanity. 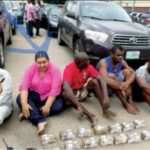