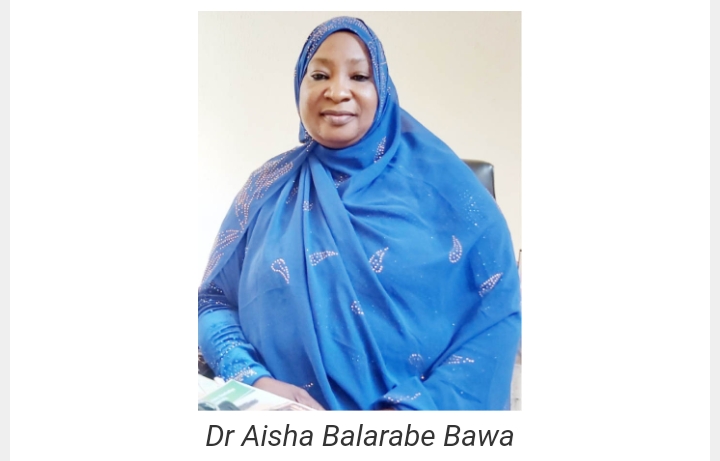 Dr Aisha Balarabe Bawa is a Senior Lecturer in the Department of History Usman Danfodiyo University, Sokoto. Recently, the Kenyatta University in Kenya reportedly revoked a PhD awarded to one of its lecturers Amos Ngaruiya and sacked him, having been found guilty of plagiarising Dr Aisha’s thesis. In this interview, Aisha Bawa, who won the best graduating student 1997 B.A History Award, reveals how she discovered the academic fraud, how the issue was handled, among others.

Your thesis was reportedly plagiarised by a Kenyan lecturer. How did you find out?

So I came across a work titled, ‘The Transformation of the Institution of First Ladies in Kenya’, written by Amos Kariuki Ngaruiya from the Department of History, Kenyatta University, Kenya.

I was impressed knowing that Kenya also acknowledges that this area hasn’t been developed. This area of study is new, looking at the composition of first ladies and perception of people on why write about a woman whose power is based on her husband’s, but her position is just because her husband assumed a position of power.

This area has been developed in America for a very long time. There are professors, scholars who specialize in presidential history and under that, they also study the wives of the president. But here in Africa, the area has not been developed and that is why I went into that area in Nigeria. I was so impressed and opened his work. It is a complete dissertation that was awarded to him in July 2018 so it was a new thesis.

However, I noticed his acknowledgement page was exactly like mine. The only difference was that he acknowledged different people from mine but it was the only difference. I went ahead to open the abstract section and again, noticed the same language I used, I now went into the table of content similar structures, but where I put Nigeria, it would be replaced with Kenya.

Though you know what we mean by plagiarism, it is not a complete adaptation of the work but any idea, which translates to intellectual fraud, for someone to take the idea of another author without acknowledging. Most of the materials I used, he used them without acknowledging the sources and when I checked the references, I found out that a lot of materials which I got – interviews, for example with Mrs Maryam Abacha. I had the opportunity in the course of my research to stay with Mrs Maryam Abacha for almost a week at her house. She gave me lots of documents which she had in her possession for me to use.

I also interacted with a lot of people that she worked with during her tenure as First Lady. All those documents reflected in his references which I very well knew he couldn’t have had access to except through my work. I got worried, so when I got to the office the next day, I discussed it with a colleague, Dr Murtala Rufai. He was frightened, even more, stating that if Mr Amos had published his work before mine it will be evident that I was the one who plagiarised it, however, if I published before him with my copyright, he would be the one to be accused of plagiarizing my work.

Can you shed more light on your work and his?

The title of my work is ‘Women in the Corridor of Power: A History of Nigerian First Ladies in Governance 1966-2015, I started with the era of General Yakubu Gowon and ended with the tenure of the late President Umaru Musa Yar’adua with Turai Yar’adua being a very powerful First Lady at that time. That was the terminating period of my work while Amos’ work is titled,‘Transformation of the Institution of First Ladies in Kenya 1953-2015.

What steps did you take?

With the help of my colleague, Dr Murtala, we got the email address of the Dean Graduate School and the Vice-Chancellor of Kenyatta University but I decided not to go to the Vice-Chancellor first. I instead emailed the Dean Graduate School in the person of Professor Elishiba Kimani on the 15th March 2018, explaining my findings regarding my thesis being plagiarised in his Faculty by Ngaruiya Kariuki Amos and also attached my thesis so that he could verify and get the matter sorted. I didn’t receive any response until 18th, that is three days later. She responded indicating that their university takes seriously the issue of plagiarism and that she is going to discuss with the Vice-Chancellor on the matter. She promised to get back to me.

On March 29, I got a mail from Professor Micheal Gicheru, Dean School of Pure and Applied Sciences, stating that an investigation process has been instituted and he was the chairman of the committee. He requested to ask me a few questions which would help the university to probe the matter further. I was also asked to shed more light on my thesis. The letter also assured that once it is confirmed to be plagiarised, the thesis will be taken down from the university’s website. I responded by enquiring first from the library because when I checked again when this investigation started, the soft copy of the thesis was not online. So, I called the librarian here in our university, who is also a friend and also undertaking her PhD in FUT Minna. I told her about the plagiarism case which I was asked to prove but could not find my thesis online, which I knew was online. She asked me to inform them that a software known as D-Server crashed and since then they were unable to upload it and that was why my thesis couldn’t be found online, but it has been there. I then replied Professor Michael based on what she told but sent him a soft copy of my thesis to verify. For someone writing on Kenyan first ladies, I see no reason why Maryam Abacha would appear in the dissertation.

What happened next after your response?

The last communication I had with them was on the 29th March 2019 and at a point I felt that they had abandoned the investigation. That was why I tried to source for the fund and publish my thesis even though it was not the complete thesis. I made it in the form of a book. I had to rush to be able to publish my thesis in book form for fear of not being accused of plagiarizing his work. But for anybody to look at the period he graduated in 2018 while mine is 2015 can vividly see it, but you know, I was scared; I didn’t want a situation that my work will be looked at as that of Amos. That was what happened until August 2019 when the issue came up. A lot of people particularly my colleagues who knew that it was my thesis that was plagiarised, sent the write-up about the outcome of the verdict from the university in Kenya for withdrawing the PhD given to Amos as well as the work, he was also disengaged.

Was there a formal communication to you on the outcome of the probe?

No. I only saw it in the media. The very day the information came was the week that I was thinking about if I should remind them as it had taken long from March to August.

How did you feel after receiving the message on the outcome of the case?

I felt relieved in the sense that judgement has been passed, and punishment has been given to this type of issue, academic fraud. I know what I went through to be able to develop my thesis. I know how much resources I used to get to these first ladies. More so the issue of interviews in History, we conduct field interviews into rural areas. I interviewed rural women. I interviewed elite women. Imagine women in the legislative house, how do you get access to them? I stayed in Abuja in a hotel, they would give you an appointment, and they would tell you that they have one commitment or the other, so you have to wait. Imagine people like Femi Falana; I was asked to interview him. I know what I went through to see this type of people. So, for someone to steal my hard-earned labour, I felt very relieved over the verdict given by the Kenyatta University. It shows that universities are taking issues of plagiarism very seriously and with that, it has served as a pointer to others.

What do you think can assist the system in checking plagiarism?

Well, from what I have seen from the press, even the university had a plagiarism checker, but he outsmarted them. He connived with a colleague who was in charge of the software. Each university should have that software. You can use it to check even write-ups. There are many things that people do not know are acts of plagiarism. You can even plagiarize your work in the academic circle if you take your work without acknowledging even yourself as a source, it is plagiarism, it is called self-plagiarism. Even if you have taken parts of the work, you must cite where that work is from and mention the name and the title of the work where it is coming from. We have been hearing about so many universities where these cases are found and they have been punished. They should take the issue seriously when the same case is found in Nigerian universities. We have a union. It frowns at every act of plagiarism. Majority of the universities are using it that is how they check even the publication of journals where you plagiarize work of somebody, it can easily be detected now. So, it is no longer business as usual.