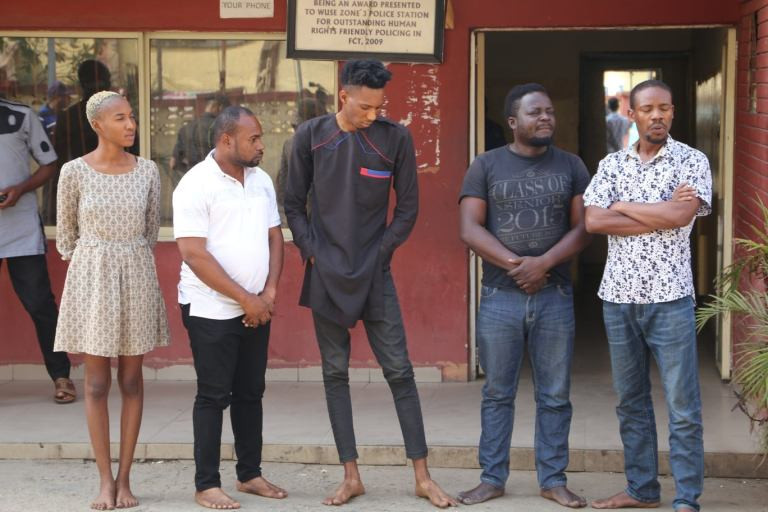 The Federal Capital Territory FCT Command of the Nigerian Police Force has arrested five Abuja residents who invaded the Wuse General Hospital with false claims of having contracted a killer disease, Coronavirus.

While parading them at the Wuse Zone 3 Divisional Police Station, Command Public Relations Officer, DSP Anjuguri Manza said the suspects claimed to be playing out a script about the virus without the knowledge or authorization of the relevant authorities of the FCTA.

The alleged pranksters had reportedly gone to the Wuse District Hospital claiming that one of them had been infected by the Coronavirus, an action which led to panic and confusion as well as a disruption of normal health service delivery at the hospital.

According to Manza, investigations into the activities of the suspects were ongoing.

However, the FCT Department of Public Health has once more reiterated that there is no confirmed case of Coronavirus in the FCT and advised residents to remain calm.

Director of Public Health in the FCT, Dr Josephine Okechukwu who disclosed this during the parade of the suspects said the FCT and indeed the country is free of the coronavirus as there is no confirmed case of the disease anywhere in Nigeria.

She described the action of the alleged pranksters as very wrong as it was capable of creating pandemonium especially in a hospital environment where the action took place.

According to her, if such false information was released on social media, it would do great damage not just to the FCT but the country at large

On his part, Special Assistant to the FCT Minister on Media, Malam Sani Abubakar noted that the FCT Administration had taken steps to ensure that all contagious diseases were well contained within the FCT.

He described the actions of the suspects as appalling as it disrupted the normal health service delivery process in the hospital and was capable of spreading fear and panic across the FCT and indeed the country.

He insisted that if found guilty of a crime, the full weight of the law should be brought to bear on the suspects so as to serve as a deterrent to others who might want to tow a similar line.

One of the suspects Peggy Shandi said their action was merely a prank about the coronavirus, but the FCT Police Command said it was still investigating the case and on the conclusion, the suspects would be charged to court.