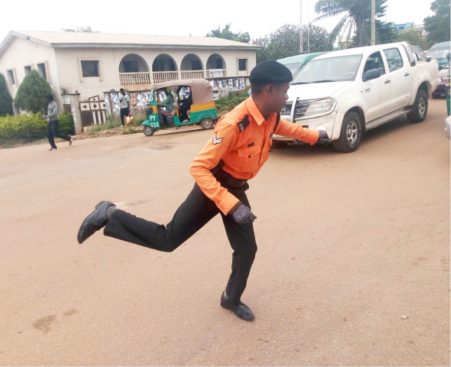 Solomon Johnson (AKA Yellow) in action

From the various antics and energetic displays he makes at the British America junction in Jos, Plateau State, it is obvious that the ever gracious and fair skinned traffic warden, popularly referred to as Yellow, loves his job.

He was nicknamed Yellow while at the Police Training School in Jos 11 years ago due to his very fair complexion. Yellow’s real name, Solomon Johnson is only known to a few and mostly in official capacity.

Commuters scream his name, ‘Yellow’ hailing him and exchanging pleasantries as they cross the ever busy British America junction, an intersection on a highway and Yellow’s work spot.

”I love my job even though sometimes, there are some very stubborn drivers and tricycle riders that don’t want to follow directions,” he said to Benue/Plateau Trust.

“As a traffic warden, you have to use your number six (intellect) to ensure that the action of the stubborn drivers and tricycle operators does not cause accidents. My duty is to render service to the people – both drivers, commuters, their properties and to ensure there is no obstruction on the road,” he said.

Controlling traffic at one of the most dangerous spots in Jos where at least four to five accidents occur monthly and once crippled one of Yellow’s colleagues, he said, “When trailer is coming you use your number six; sometimes I notice the headlight or the bleeping sound of the trailer to know that it must have lost its brakes, so I immediately know there is a problem and clear the road for the trailer by blocking other vehicles.”

Ibrahim Abubakar, a commuter at the British America junction while appreciating the services rendered by Yellow said, “he is very energetic and it is obvious he is passionate about his job, even by his level of concentration, you would know.”

Concentration, according to Yellow is the most important aspect of his job which he said others abuse. “There are times you see someone controlling traffic and he is wearing an ear piece, either answering calls or listening to music, it is wrong. You are not supposed to receive phone calls while on the job because it could distract you.”

Yellow advised that to reduce the accident on the sloppy highway of British America, there is a need for a roundabout on the junction.

Jamima Isa, a motorist agrees with Yellow, saying: “that highway is even a danger to him because there are several instances where trailers have lost their brakes. In fact, there was a traffic warden who was a victim of an accident on that same spot a few years ago.”

But Yellow has been lucky. He has never been involved in an accident despite working on the highway for a year. His luck, however, ran out in early October when the enthusiastic traffic warden was involved in a hit and run accident when he tried to control traffic around Plateau Hospital.

”It was around 7pm and I was on my way home in a tricycle when I noticed a traffic gridlock around Plateau Hospital. I jumped down from the tricycle to control the traffic and shortly after, I was hit by a vehicle.’’

Not fully recuperated, Yellow has returned to the highway and told our correspondent: ”I can’t stay at home, I miss the job. I’m not completely healed but I can still do the work.”

”I feel so honoured and happy,” he said adding that, “I do my job because I love it but I didn’t know that other people have been observing me and that makes me happy.” 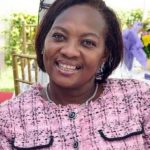