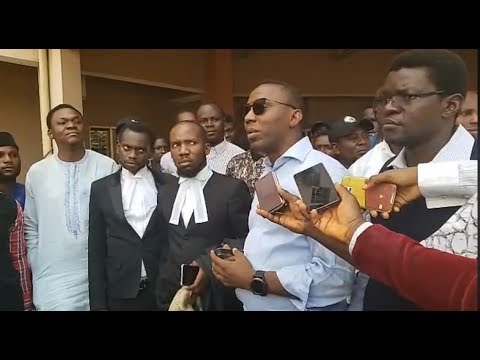 President Muhammadu Buhari in 2003, after he lost election under the defunct ANPP, decided to stage protests all over the country, and he was never arrested or prosecuted. The rally was disbanded by police, and Buhari was told to go to court.

That was the defence of Femi Falana, lead lawyer on Omoyele Sowore’s defence team in the suit the federal government filed against the Sahara Reporters publisher and RevolutionNow protest leader who has been in DSS detention since August 3.

Falana also stated  before Justice Ijeoma Ojiukwu of the Abuja Federal High Court that the current leaders of the ruling All Progressives Congress, APC, including President Buhari, in 2011, called for the kind of revolution that took place in Egypt.

The SAN however pointed out that Sowore had specifically warned his followers not to engage in any form of violence.

“We submit that the use of the word Revolution is not a criminal offence in Nigeria and it has never been criminalized.  Hence, President Buhari called for a revolution and was never arrested or prosecuted,” he said.

According to him, the only time some youths were arrested for using the term “revolution” was in 1948 under the colonial era, noting they were not charged with treason but with sedition.

He also argued the federal government has failed to give any cogent reason why Sowore should not be released on bail pending his trial because he is presumed innocent by virtue of section 36 of the 1999 Constitution.

On count-two of the charge that bordered on the allegation that Sowore insulted President Buhari, Falana argued that under the law, no public office is allowed to use the machinery of the state to settle scores with his opponent.

“If the President feels offended by any statement made by the 1st defendant, the only option open to him into sue for libel. He said the Court of Appeal, in its judgement in 2008, upheld the right of Nigerians to protest against the government without firstly security police permit.”

On the allegation of money laundering, he argued the charge is not enough to deny the defendants bail, “when those that stole billions have all been granted bail”.

He cited the Dokubo- Asari case in which the warlord admitted in his own statement that he was involved in the blowing up of pipelines in the Niger Delta.

“Sowore never admitted that he committed any offence in his own statement.”

Falana, therefore, urged the court to grant Sowore, who was the AAC presidential candidate in the last election,  bail on self-recognizance as “a political leader”.

He also reminded the court that Sowore was earlier granted bail on the condition that he would deposit his international passport with the Registrar.

Justice Ijeoma Ojukwu would later grant Swore bail I the sum of N100m, and restriction of his movement to Abuja only, after depositing his international travel documents with the court.