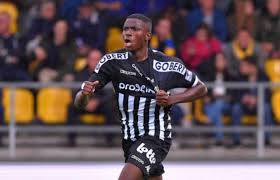 Nigeria striker Victor Osimhen has revealed that it was difficult turning down a move to join Italian giants AC Milan during the January transfer window, but is glad he took a firm decision to stay put at Sporting Charleroi, National Daily gathered.

The Rossoneri tabled a €12m bid for the 20-year-old lanky striker who has scored 11 goals and provided three assists in 24 games for Sporting Charleroi this season in all competitions.

Osimhen who is currently on a season loan deal from German club, VFL Wolfsburg at Sporting Charleroi in the Belgian Pro division admitted that it was the right decision at that time, for obvious reasons.

“It was a difficult decision to stay, but I am right here at Charleroi, January was not the time to leave.”

Osimhen is expected to make his 20th league start for Sporting Charleroi when they host Genk in Saturday’s league game.

Aina, Torino Teammates Fight Back Tears After 7-0 Thrashing By Atalanta

Aina, Torino Teammates Fight Back Tears After 7-0 Thrashing By Atalanta

Photo of the suspect Men of the Abuja police command have reportedly arrested Chukwukelu Adumah, pictured above, for allegedly…

Tragedy struck in Bauchi on Friday when a jealous man, simply identified as ‘Solomon’ stabbed his girlfriend, Patience Zakkari,…

Ahead of the gubernatorial election coming up later this year in Edo State, the Peoples’ Democratic Party (PDP) from…

Hundreds of medical personnel are being deployed to Wuhan, China, and affected areas to treat the ill and stem…

Check Out Top 10 Most Eligible, Wealthy Bachelors In Nigeria