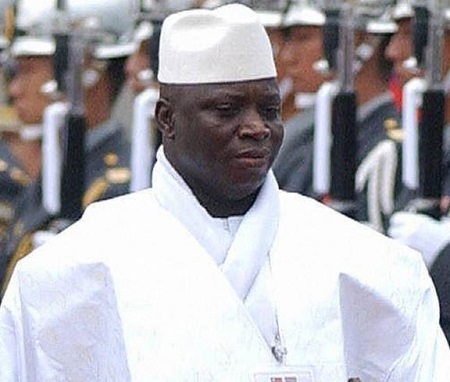 On the last day of hearings before Gambia’s Truth and Reconciliation Commission, revelations emerged on how former Gambia President Yahaya Jammeh ordered the massacre of Nigerian and other African migrants.

Staff Sergeant Omar Jallow told the hearing Jammeh ordered the killing of some 30 migrants he said were “mercenaries” sent to topple him in 2005.

The former officer in the Presidential Guard said about 45 Europe-bound migrants comprising nationals from Ghana, Nigeria, Senegal and Togo, were arrested on a beach while trying to get to Europe, reports Agence France Presse.

“Yahaya Jammeh ordered the execution of the foreign nationals,” believing they were mercenaries sent to topple him, Jallow said.

They were taken to a firing range and then the soldiers were told by their commanding officer, Lieutenant Solo Bojang, that the captives were to be killed.

“Solo said these people were mercenaries and he told us that the order from the former head of state (Yahaya Jammeh) was to fire at them,” Jallow said, adding that the bodies were thrown into a well.

Human Rights Watch said the other migrants were also killed.

Vendor Mariama Mangaendor told AFP he was “shocked when I watched television and see Staff Sergeant Omar Jallow confessing to taking part in the execution of 48 people on the orders of ex-President Yahaya Jammeh. I regretted voting for Jammeh in past presidential elections”.

Musa Manjang, a taxi driver, added: “Jammeh has been exposed at last. Who will now deny that he was the one responsible for the mysterious disappearances of people including the abduction and killing of over 50 West African nationals?”