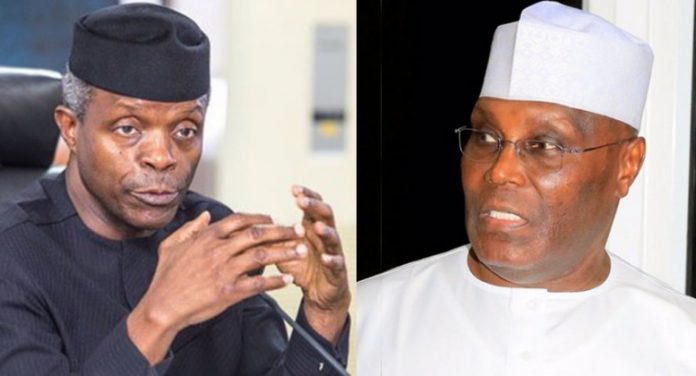 The former Vice President of Nigeria, Atiku Abubakar, has transmitted his message of felicitation to Vice President Yemi Osinbajo, rejoicing with him for his survival in the crash of the Chopper conveying him and his entourage in Kabba, Kogi State.

Atiku on his official tweet handle wrote: “Dear Vice President @ProfOsinbajo, I just received news of the crash of your helicopter in Kabba, Kogi State. I am happy to note however that all is well with you and your delegation. –AA”

Akande in a tweet indicated: “VP Osinbajo’s Chopper crash lands in Kabba, but he and the entire crew safe. He is continuing with his engagements and plans for the day in Kogi State.”

National Daily gathered that the Kabba accident was the second time the Vice President’s helicopter would crash-land.

It was recalled that in June 2017, Professor Osinbajo survived the accident when the chopper conveying him crash-landed in Gwagawalada, Abuja shortly after takeoff.

He was in the area council to attend the graduation of 40 senior officers of the Nigeria Customs Service.

Osinbajo was in Kogi State in continuation of his projection of the Social Intervention Programme of the ruling All Progressives Congress (APC) Social Investment Programmes which include the N-Power programme, the National Home-Grown School Feeding Programme (NHGSFP), the Conditional Cash Transfer (CCT) programme and the Government Enterprise and Empowerment Programme (GEEP), which consists of the MarketMoni, FarmerMoni and TraderMoni schemes.