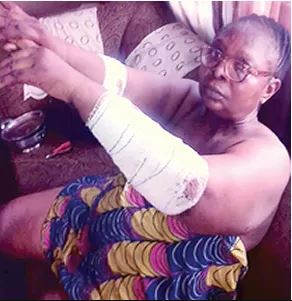 According to a report by NewTelegraph, Mrs. Eunice Kole Johnson (60) has narrated how she suddenly jerked up from sleep to find a total stranger attempting to stab her to death.

Johnson is presently asking the Lagos State Commissioner of Police, Zubairu Muazu, to launch investigation to find out those who hired the stranger to kill her. The stranger would later be identified as Jonathan Utueze by policemen.

Johnson explained that the stranger attacked her with a broken bottle. He had already stabbed her hand and was going for her neck, when she suddenly opened her eyes, saw the descending bottle and used her hand to block it.

The old woman was attacked in her shop at Aswani Market, Isolo, Lagos.

Johnson, who still appears shaken, said: “I would have been a dead person, but for the divine intervention. The man was aiming for my neck with a broken bottle when I woke up. He had already stabbed me once.”

Recalling the event of that fateful May 7th, Johnson said that she had been selling in the market for over 20 years and had never had such a scaring experience.

She said: “I came to the market in the early hours of the day and opened my shop. I have health challenges and on that day I was feeling out of sort and decided to take my medicine. Even after taking the medicine, I still was not feeling well. I went into my shop and lay on a table. My friend, Mrs. Cedi Osaigbovo, who has a shop beside my own, asked what was wrong with me. I told her that I was not feeling well. A few minutes later, I fell asleep.

“Suddenly, I heard a sound and thought that something fell from the shelf and landed on my hand. As I opened my eyes, I saw a man standing before me, holding a broken bottle. I didn’t even know that he had already stabbed me on my hand. I didn’t feel the first stab. He was just about to stab me on the neck, when I opened my eyes.

“I used my left hand to block the descending bottle. I screamed and asked him the crime I had committed against him. I also asked him who sent him to kill me. I was soaked in blood. He had stabbed my two hands with the bottle. Other traders heard me shout and rushed to my shop. The young man ran out.”

Johnson said that she was in shock and pains and couldn’t explain what transpired when concerned friends started asking questions.

According to her, when the stranger attempted to escape, young men in the market chased after him. Traders fashioned bandages for Johnson’s injuries and took her to the Iyaloja. The assailant was also caught and taken to the Iyaloja.

Johnson said: “The young man was tied with a rope. I begged Iyaloja to ask him my offence against him. When Iyaloja noticed I was bleeding too much, she instructed that I should be taken to hospital. I was taken to St. Emmanuel Hospital, close to Aswani Market. The hospital refused to treat me, insisting that I must collect card for N10,000 or deposit N8,000. People that went with me begged them, but they refused.”

Johnson further narrated: “When Iyaloja heard about the hospital’s attitude, she told people to take me to Isolo General Hospital. I was beginning to get weak; I had lost too much blood. I could hardly speak. I tried to remember if I had offended anyone, but couldn’t think of anyone.”

Johnson said that at the General Hospital, she was attended to after a little delay. The delay was because the hospital was asking for police report. One of my educated friends challenged them by making reference to the Lagos State government law. The law states that hospitals should treat injured persons without police report.

The woman said she was put in a wheelchair and taken to Emergency Unit. Johnson was treated and given three drips.

“The doctor said that if I had not been treated when I was, that I would have been dead. He said that I had lost a lot of blood,” said Johnson.

Johnson said: “I told him that I was in pains. What I needed was to go home and rest. The Investigating Police Officer (IPO), a woman, came to me in the car, just as I was leaving, to insist that the Divisional Police Officer (DPO) wanted me to come to the station at 9a.m. the following day. I pleaded that they should give me time to recover.”

She was told that if she didn’t come to the police, it would be taken that she didn’t want to press for charges.

“As I was explaining my condition to her, the DPO with other senior officers came to where we parked. They took pictures of me with their phones. Later, the DPO said, woman you must come tomorrow morning. The following day, I was not myself. I was in pains. Later in the day, the policewoman called me. Two days later, I was able to go to the police station. And as I was discussing with the IPO, the DPO came in. The IPO said that she was sure that I had money to make case. I told her that I didn’t have money. She said that I needed to bring money to hire Black Maria, which would take the suspect to court. She said that I should bring N10,000 to register the case in court.”

Johnson further stated: “I learnt that our market leaders, who came to the police station, gave them N15,000. I told the IPO that it was the responsibility of government to provide the necessary things in court for the citizens. The police laughed at me, saying that people even pay for writing statements at the police station. The IPO told one of the elders to go and tell the DPO that I was not interested in making a case anyone. The man left for the DPO’s office, came back to say that the DPO insisted I should go and look for money. The IPO threatened to release the suspect if I didn’t bring money.”

Johnson said that she was at the police station until 1p.m., when she started feeling pains. But then the IPO insisted Johnson should bring money for a vehicle to court, one of the market leaders went and hired a tricycle.

When they got to the Magistrates’ Court, Isolo, the IPO went in and returned to claim that she had registered the case.

“At the court, I saw the market leader giving the IPO money. I started feeling dizzy. I complained and the market leader asked me to go home. The IPO saw me leave and called me back. She asked where I was going, I said home. She started complaining that I didn’t want to bring out money to prosecute the case. She said that I was not ready for a case. She said that I didn’t want to spend money,” she added. Osaigbovo, who was among the people that took Johnson to the hospital, said: “My friend is not a trouble person. I’m still in shock. I don’t understand why that man wanted to kill my friend.” The state Police Public Relations Officer (PPRO), Bala Elkana, explained that after the attack, the suspect was arrested and charged to court. When told about the allegation of police extortion of Johnson and her friends at Aswani Police Station, Elkana said that it was a lie. He added: “Nothing like that happened. The DPO provided the vehicle that took the suspect, Jonathan Utueze, to court. It is the responsibility of police station to provide vehicle that will convey the suspect to court. The suspect was arrested and charged with assault.” 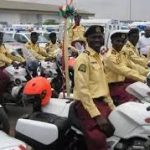 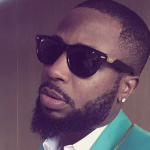 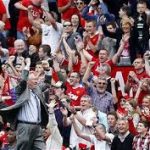