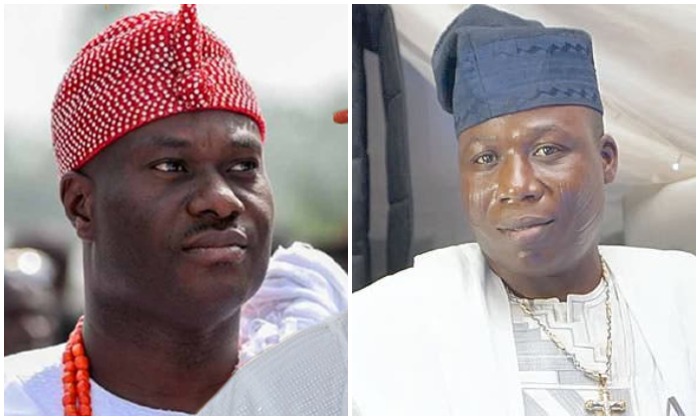 The Ooni of Ife, Oba Adeyeye Ogunwusi has been accused of failing people of the South-west region with his recent visit to President Muhammadu Buhari.

Popular Yoruba rights activist, Sunday Adeyemo aka Sunday Igboho said  this during an interview with Punch.

According to him, the Ooni failed to tell Buhari the truth about herdsmen crisis rocking the South-West region.

The activist stated this on Wednesday morning at a virtual ‘Townhall With Yoruba In Diaspora’ monitored by The PUNCH.

According to him, the monarch failed to convey the pains and displeasure of the Yoruba people to the President during the visit.

The PUNCH had reported that Igboho issued a seven-day quit notice to herdsmen accused of sundry crimes in the Ibarapa area of Oyo State and enforced same.

Oba Ogunwusi after meeting the President, however, urged Igboho not to take laws into his hands.

The monarch had said though Igboho has done well to speak for the downtrodden, it was time he allowed the constituted authorities including the Oyo State Governor, Seyi Makinde, to take charge and handle the security challenges in the state.

But the activist said some politicians were behind Ooni’s latest move, adding that the monarch disappointed the Yoruba people by not speaking against the killer herdsmen in the region when he met with the President.

Igboho said, “The monarchs are now afraid but we must keep praying for them to be united with one voice. They should not be afraid of arrest at their age. Some of them don’t even grant audience at their palaces any longer. So, everything is now in God’s hands.

“When Ooni met with Buhari over the herdsmen issue, Ooni should have told Buhari the truth but he did not. When Ooni returned, he started tackling me to leave the remaining task to the government to finish. You can imagine that kind of talk?

“Alaafin of Oyo has asked me to meet him over the matter. Alaafin should have been the one invited to meet Buhari but since the Ooni was invited, he should be bold to tell the President the whole truth and make the demands of the Yoruba people known to the President.”

“The Ooni disappointed himself. Some politicians are behind Ooni’s latest move. He invited me to his palace but I refused to go. I would have gone if he had represented us well but he did not. I won’t honour any monarch who does not cooperate with me. Enough is enough, the Fulani have done enough,” the activist submitted in the teleconference monitored by The PUNCH.