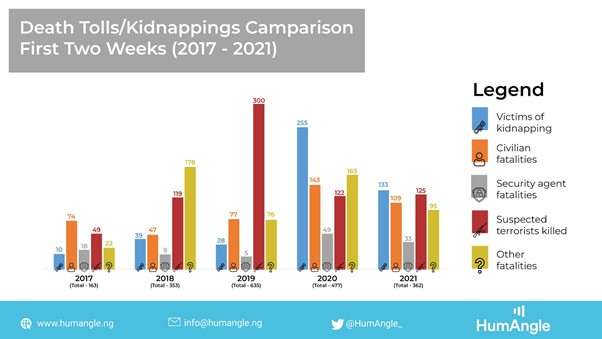 Analysis of data from the Nigeria Security Tracker (NST) shows that like many other problems, insecurity has seeped into the new year — and not so quietly too.

Between Jan. 1 and Jan. 14,  a total of 362 deaths were linked to insecurity and counterinsurgency efforts across the country.

This is one of the worst civilian death tolls within the first two weeks of the last five years, according to available data.

In 2017, there was a total death toll of 163 in the same period, including 74 civilians and 18 security official fatalities.

In 2018, the death toll was 353 and it included a civilian toll of 47 and a security official toll of nine.

Further study of the five-year trend revealed that the second-highest number of kidnap victims (133) was recorded in 2021.

On Jan. 2, over 50 travellers, including a humanitarian worker employed by the United Nations Refugee Agency (UNHCR), were kidnapped by Boko Haram members along the Maiduguri-Jakana-Damaturu highway.

“The terrorists ambushed vehicles conveying commuters near Matari village between Minok and Jakana highway. One of them, Alooma, was seized around 8:30 am,” a security source informed journalists.

In commemoration of the annual Armed Forces Remembrance Day on Friday, Nigeria’s President Muhammadu Buhari said his government was investing heavily in the purchase of military equipment and the welfare of soldiers.

“I am reiterating my directives to the Service Chiefs regarding greater synergy and cooperation, and also a more sustained focus on intelligence gathering and interpretation. I am confident that we will see significant improvement in our security situation this year,” Buhari said.

Meanwhile, Presidential spokesperson Femi Adesina in an article published the previous day said only God could secure the country and Nigerians who did not pray might be contributing to the insurgency.

“Do we ever remember our soldiers? When you left your room this morning, did you think to pray…did you pray for our soldiers? Victory comes from God alone. If you don’t pray, you may be guilty of prolonging the war in North-East, North-west, North-central, and all over Nigeria,” Adesina wrote.

He had similarly been quoted as saying in December, last year,  that only God could effectively “supervise” Nigeria’s borders with the Republic of Niger.