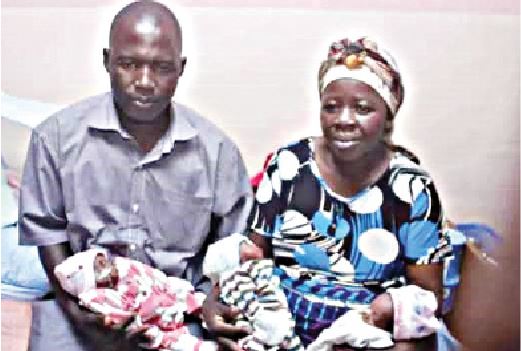 A Nigerian pastor, Rev James Musa who finally had a child with his wife after 23 years, speaks about the development in this interview with The PUNCH.

Rev James Musa is the husband of Mrs Abigail Musa, who was delivered of a set of quintuplets after 23 years of marriage, and has been stranded at the Fertile Ground Hospital, Zaramaganda Road, Jos, Plateau State, over N3.7m accumulated hospital bill. The 47-year-old full-time pastor at Church of Christ in Nations from the Barkin Ladi Local Government Area of Plateau State tells ALEXANDER OKERE how the babies’ arrival has affected his family.

When did you meet your wife?

We are from the same village and I met her there. We got married in November, 1995, and for 23 years, we never had a child.

How did you cope during those years?

During that period, we passed through so many challenges. As an African man, knowing the African culture, when you are not able to have a child, people call you names and look down on you. In fact, the challenges were too many.

Is there any in particular that you can remember?

There was a time some people tried their best to see that my wife and I separated.

How do you mean?

When you said you were called names, what exactly did they call you?

We were called the barren ones. When I was still training to become a pastor, a man came from my community and went to the pastors’ college asking for my residence. He asked some people at the college whether they knew a pastor that did not have a child. I heard him from where I was and was surprised. That challenged me and I even cried. But since she had the babies, my name has changed from the barren one to the father of five.

Were you reminded of your challenge each time you prayed for couples who wished to have to be blessed with children?

I have never had that thought because I compared my situation with that of Abraham in the Bible. He spent 24 years with his wife, Sarah, without a child. I spent 23 years, so you can see the similarities. I understood that God allowed it for a purpose because most of the hospitals I visited didn’t confirm that my wife or I had a medical problem. Most of the doctors advised us to pray because they had done their best.

What role did your parents play during that trying time?

Actually, I thank God for the parents God gave me because if not for their encouragement, I think I would have divorced my wife. They encouraged us. Although my father died when I was a little boy, I thank God for my mother and my stepmother, brothers and sisters. There was no time anyone of them ever told me something that offended me concerning my wife. The challenges came from other relations and people around us.

How did you feel when your wife told you she was pregnant?

When I heard the news, I was very happy. We were so happy that we couldn’t even sleep that night because we were busy thanking God in prayer. But I was also shocked because we were almost at the point of losing hope because throughout the period that we didn’t have a child, we went from one hospital or another. There was a time we were referred from the University of Jos Teaching Hospital to the National Hospital Abuja. In fact, we spent a lot.

How much did you spend during your search for a solution?

We spent over N5m.

Did you have to sell any of your property to raise money?

When I was a pastor in one of the churches in my area, one of my members gave me a plot of land somewhere in Bukuru, Jos. I had to sell that plot of land to solve the problem. I sold it at a cheap price.

Did your wife suffer any complications during the pregnancy?

I thank God for the wife God gave me. Throughout the period of the pregnancy, there was no day she complained about any difficulty, even her doctor was surprised. It was when it got to the point when she could not trek due to the heaviness of the pregnancy that the doctor had to tell her to go to the hospital.  She spent three and a half months in the hospital. She was advised to stay so that the doctors could monitor her.

Did the management of the hospital tell you how much it would cost you?

Did you know your wife was pregnant with five babies?

Actually, I didn’t know. I thought it was going to be one or two. She went for a scan at the hospital alone. When she came back, I asked her how it went, she didn’t tell me but from the look on her face, I could see that she was very disturbed. But the following day, she told me she was expecting quadruplets. But when she had the next scan, the doctor confirmed that she was carrying a set of quintuplets.

How did that make you feel?

In fact, I felt weak. I wondered how we would take care of the children. When I considered our financial status, I was bothered. But she was courageous and started encouraging me. She reminded me of one of my prayers.

What did you pray about?

There was a time I prayed to God. At that time the son of one of my siblings lived with me and he was stubborn. So, I told God that even if he gave me five children, I would be able to accept them. So, my wife reminded me about that prayer. It looked like the prayer was answered. I feel God has blessed me with the children I didn’t have 23 years ago.

You said your wife was stranded at the hospital over an accumulated hospital bill of N3.7m. How did you arrive at that amount?

I asked the management of the hospital how much I owed them and they told me I owed them about N4m. At that point, I almost collapsed. If not for my ministerial work, I would have fled, but I thank God for encouraging me. The bill came from the room she stayed, the incubators where the babies were kept as they were born prematurely and each child consumed N5, 000 every day. Apart from that, we conducted a test on the children every two days at N3, 000 per child. There were also consultation charges, medical charges and other bills. But the doctors tried.

Did they insist that the debt must be paid before your wife would be allowed to return home?

Yes. On Monday (December 14, 2020), I almost cried at the hospital. I begged them to allow me to take her home and that I would pay them by God’s grace. But the doctor didn’t even give me his attention and I was embarrassed. But he was patient enough. Most of the money I saved was consumed on feeding the children and their mother.

How much have you been able to pay?

Have you received any assistance from the government or good-spirited Nigerians?

One cannot say what those children will become tomorrow. God has a purpose for them and that purpose is not only for this family but also for the nation. So, I am pleading with the state government, the lawmaker representing Plateau North and Nigerians to assist us. Anyone of them can become a governor, commissioner or doctor.

What is the gender of the children?

Initially, they were five – two boys and three girls. But I lost two of them, a boy and a girl. I can tell exactly what happened. I was told that one of them died during birth. The second one was doing well before he died. We fed them with a type of milk that cost us N3, 000 each day.