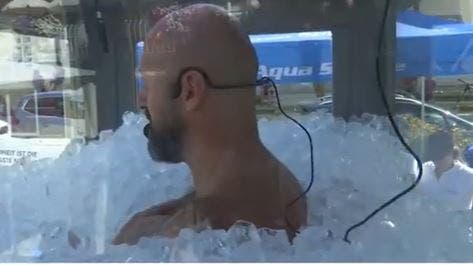 An Austrian man took on a Guinness World Record by submerging himself up to the shoulders in ice for 2 hours, 30 minutes, 53 seconds. Josef Koeberl, 43, donned a pair of skimpy swimming trunks and climbed into a tank placed in the main square of the town of Melk, Austria, to be submerged up to his shoulders in ice.

Koeberl beat the record set by Chinese man Songhai Jin, who spent 1 hour, 53 minutes, 10 seconds in ice, but the Austrian said Guinness World Records officials still have to review the evidence from his attempt to officially certify it as a new record.

Koeberl said he previously managed 2 hours, 8 minutes submerged in ice in Vienna in 2014, but the stunt was not certified as a world record. ALSO READ: Ethiopia bans fireworks in new year celebrations “My motivation was to go beyond my own limits and point out climate change at the same time.

As I train a lot in high alpine terrain, I want to raise awareness on the melting of the glaciers,” Koeberl told CNN. Koeberl said he plans an attempt to beat his own record next year by remaining in the ice for three hours.