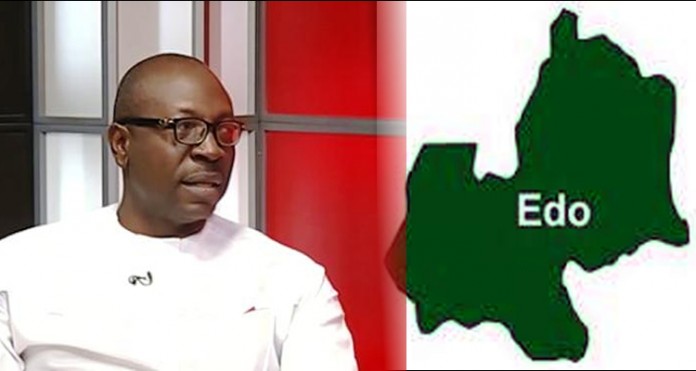 Edo 2020: Ize-Iyamu attempts to upstage Obaseki with “Simple Agenda — A Manifesto of Hope”

The governorship candidate of the All Progressives Congress (APC) in the Edo State election, Pastor Osagie Ize-Iyamu, has opened up his game to upstage incumbent Governor Godwin Obaseki in the build up to the September 19 governorship election in the state. This is obviously a season of promises and counter-promises, fireworks, political brinkmanship, and the ugly side of warfare and occasional violence in the state, like other elections in Nigeria.

Pastor Osagie Ize-Iyamu has launched himself into the Edo political space, attempting to permeate the psyche of citizens in the state towards influencing their polling decisions or choices among the governorship candidates. The APC candidate opened his political marketing with highlights of his policy thrusts revealing his mission to transform Edo State and ameliorate the standard of living of the people. Ize-Iyamu carefully chose words of an opposition determined to unseat an incumbent in projecting his manifesto in simplified context.

Pastor Ize-Iyamu in a statement in Benin City  by the Director of Communication and Media of his Campaign Organisation, John Mayaki, revealed to the people of Edo State the policies and programs he intends to implement in the 18 Local Government Areas of the State if he becomes their governor, which are compiled in a blueprint he declared as – The Simple Agenda—A Manifesto of Hope.

Pastor Ize-Iyamu in the statement decried: “It is sad and regrettable that my clarity of purpose is what shortsighted minds call desperation; it is a definite statement of ambition.” Though, there appears to be slight contradiction condemning those who conceived him as desperate while at admitting the impulse of ambition in contesting for Edo governor. The contradiction was further strengthened with an impression of self-motive: “It’s a truism that Pastor Osagie Ize-Iyamu wants to become the governor and everyone knows this; Make no pretense about that;” he, however, added: “he is humbled by the people’s support and belief in him.”

The Communication and Media Director subsequently revealed the crux of his principal’s mission: “Pastor Osagie Ize-Iyamu’s desire to reposition and restructure Edo State is now our project, the people’s project.

“He knows what he wants and will surely go for it because it will be for all Edo people’s collective benefit.

“It will not be like the case of the grown man who was foisted on the people.”

The director maintained: “And the strategy he hopes to bring these desires to reality is through his carefully thought-out policies and programs encapsulated in his manifesto which he tagged the simple agenda.

“These have always been in his mind: The Simple Agenda—A Manifesto of Hope.”

He explained that the manifesto was there in 2016 but coming into being as the comprehensive collection of politically applicable principles, clauses, and initiatives gained from long years in active political service.

He declared: “We all saw the power and effect the campaign powered by this manifesto had, and now, a newer and updated version appears, coming to accommodate the needs of the time and to iron out a life ruffled by the bad attitudes of the Obaseki leadership.”

The Director explained that the updated manifesto reflects the pains and desires of the vast majority of Edo people whom Pastor Osagie Ize-Iyamu interacted with in consonance with his belief in people-centered governance and leadership.

The director further explained that the summary of the simple agenda with its deep intentions and objectives, are unified in purpose and conception, showcasing a deliberateness that is vital for progress and development.

“Unfortunately, these are traits missing in Edo leadership as presently constituted where the scarce resources rather being used for the betterment of its citizens, are channeled to promote violence and thuggery, victimization and plunder,” he declared.

Though, the statement presented a summary of the manifesto, the APC candidate and his team may need some modifications and adjustments to include people’s ownership of both his campaign and potential government in his political communications during the electioneering campaigns. There appears to be a vacuum.  This is more so when unseating an incumbent requires deep grassroots mobilization, appeals and persuasions. The campaign must be more organic so as to relate cordially with the people.

However, the incumbency powers will pose serious challenge for Ize-Iyamu, though, the federal might could work for the APC; but clearly rigging could be counter-productive in the 2020 governorship in the Edo election because of the high consciousness of the people and the protracted conflict between the incumbent Governor Obaseki and the former APC national chairman, Adams Oshiomhole. Tensions may rise. Caution need to be the guiding principle of all candidates and parties if promotion of the interest of the people is the major stake and motive of all candidates in the election.

Meanwhile, residents of the state are waiting for the incumbent governor to give account of his first tenure, then, convince them that he deserves a second tenure.