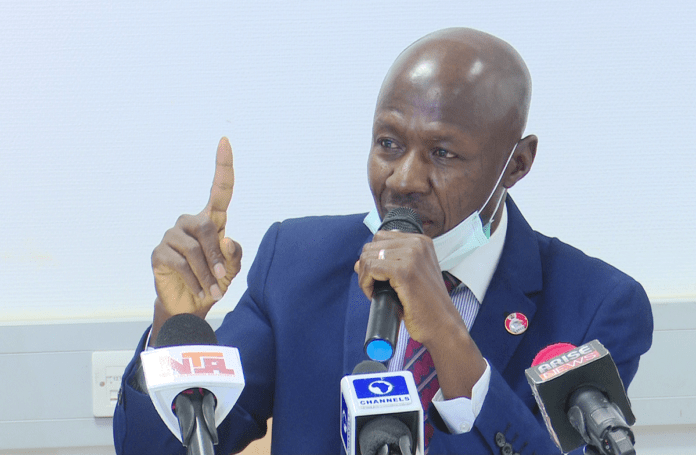 The Acting Chairman of the Economic and

President Muhammadu Buhari’s government which allows for non-interference in its works and zero tolerance for any act of corruption.

He made this disclosure in Abuja  on Thursday, June 11,

and Anti-corruption Summit.  According to Magu, “The political will we

unprecedented. That the president allows the EFCC to operate without

interference has been one of our biggest strengths.”

Based on this strength and many other conducive enablement, the EFCC’s boss said that strings of achievements have been made in the last couple of years. According to him,   the EFCC has secured 2,240 convictions

and recovered assets in  excess of N980 billlion in the last five years.

“Our scorecard in the area of conviction

billion and quite a large array of non monetary assets like properties,

and other automobiles, jewelry, plaza, shopping malls, electronics amongst

While urging Nigerians to take ownership of the

anti-corruption fight, Magu stated that, “As I always emphasize, public

ownership of the anti-corruption war,  is one of the best showcase of patriotism.

Magu admitted that there are challenges on the way,   especially in the case

involving the former Petroleum Minister, Diezani Alison-Madueke. “We have

more than five years”,  he said.  He vowed that the  former governor of Abia

State, Orji Uzor Kalu would be brought to trial,  no matter the impediment.   “The judgment is clear.We will go

back to court working on the judicial directive from the Supreme Court,” he said.

Across the zones of the EFCC, facts and figures have been rolled out about the increasing achievements of the Commission,   based on its assigned mandate.  Nigerians are also being charged to show more commitment to the fight against corruption.  The Lagos Zonal Head of the EFCC, Mr. Muhammed Rabo,  noted that youths are critical stakeholders in ridding the nation of unsavory and fraudulent practices and charged them to steer clear of such conducts. ” One critical stakeholder in the fight is the youth. However, most economic and financial crimes, especially cyber crimes are committed by young people”, he said.

On his own part, Malaifia Yakubu,  Kaduna Zonal Head of the Commission charged the public to key into the whistle-blowing policy of the government and exposed fraudsters in their vicinity.  Meanwhile,  In the Port Harcourt Zonal office of the EFCC,  a total sum of N3.214billion had been released to the Imo State government out of the N7.9billion frozen in different accounts discovered in the investigation of former Governor of Imo State, Chief Rochas Okorocha.  Usman Imam,  Port Harcourt Zonal Head said that the money was released to the State government to pay salaries, pensions and meet its obligations to workers.

To crown it all, the  Benin Zonal Head of the Commission, A.H Danmusa urged the media to do more investigative stories to expose corruption. “I convey the profound appreciation of the Acting Executive Chairman, Ibrahim Magu to you and charge you as media personnel to expose people, who without any identifiable source of livelihood, continue to live large on other people’s sweat. We implore you to use your various platforms to sensitize the public on the ills of corruption and its consequences on the society”, he said.