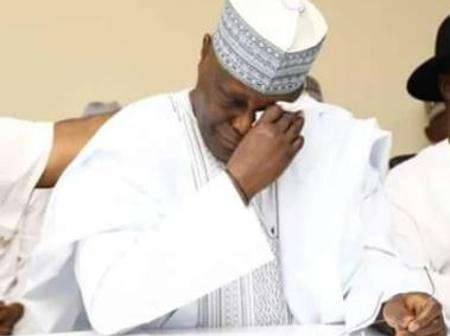 5 Reasons Why Atiku May Not Become President In 2023

As the countdown to 2023 begins and several candidates have started announcing their intentions to run for the office of the President of the federal republic of Nigeria, it appears that there would be a lot of competition ahead.

The successful politician, businessman and philanthropist who served as the 11th Vice President of Nigeria from 1999 to 2007 during the presidency of Olusegun Obasanjo, has contested in all the elections since then.

As we draw closer to 2023, we present to you some top reasons why we think Atiku may not win the Presidential elections if he contests again.

Atiku Abubakar is 73 years old and as vibrant as he may appear to be, he has come of age and a lot of people believe age would hinder performance and may not vote for him.

It can be recalled that Buhari claimed his age has limited his performance as President, a revelation that came to the younger generation who massively supported him to become President.

We also think that a lot of young Politicians who have been performing excellently have given the young people a glimpse of hope to run for public office and this may one way or the other affect Atiku’s cummulative votes come 2023.

It should also be noted that more people including the likes of Kingsley Moghalu, Fela Durotoyem Omoyele Sowore amongst other young people ran for the position of President in the last election and may also be doing so again and that may affect the support Atiku should usually get.

While addressing a press conference on Monday in Abuja, the PDP National Publicity Secretary, Kola Ologbondiyan, said: “The PDP has not come to discussion in respect of zoning. I want to leave it at that.”

But as the election draws closer, the issue of zoning may come up and this may affect Atiku’s bid to run under the platform.

Popular APC chieftain and founding father, Bola Ahmed Tinubu has been hinted to possibly run for the office of the Presidency come 2023, and this may as well have an effect on Atiku’s shot at the seat.

Tinubu was instrumental in making Buhari President in 2015 and his influence in the political sphere can not be underestimated. President Buhari would most likely support Tinubu’s ambition if he decides to run for office and this may definitely hamper Atiku’s chances of winning the most votes.

Rivers State Governor, Nyesom Wike has lowkey revealed his plans to run for Presidency in 2023 and as a top People’s Democractic Party Governor he may as well be competing for the party’s ticket and this may as well give Atiku a tough time.

In addition, the PDP Governors who are young and vibrant are looking for a way to break from the norm, as they usually nominating very old politicians as candidate as they are beginning to prepare the party for a future led by younger politicians.

Atiku’s has been implicated in a number of corruption charges and that may take a toll on his political career.

He was implicated in an international bribery scandal alongside, William Jefferson and one of Atiku’s wives, Jennifer Atiku Abubakar.

There were several rumours by pundits that Atiku was unable to visit the United States, in January 2017, the U.S. government released a statement saying it would need the consent of the politician before it can disclose the true state of his immigration status to the United States.

Although recently, Atiku in company with Bukola Saraki, visited the United States on the 17th of January 2019 with the aid of Brian Ballard and has lowkey dropped the speculations about him.