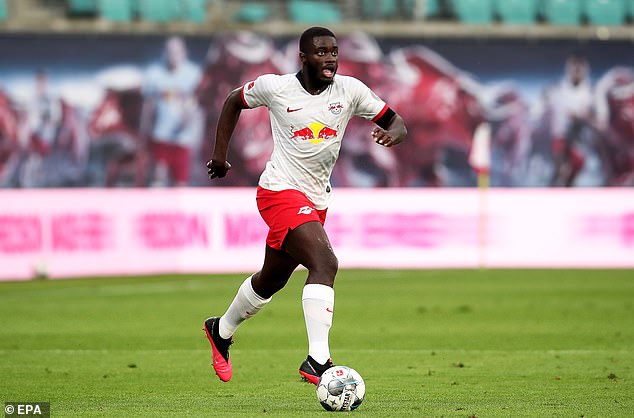 The French defender has attracted interest from top European including Manchester United and Bayern Munich after an impressive season in the Bundesliga.

Milan have also shown interest in Upamecano in their bid to find a long-term partner for captain Alessio Romagnoli, with Sevilla loanee Simon Kjaer’s future at San Siro beyond the end of the season uncertain.

Also Read: Oparaku: My Olympic Gold Medal Is In The Bank Because I Treasure It So Much

But according to Tuttosport, Milan have been informed by Leipzig that the 21-year-old is set to make a move to Arsenal.

The report claims that Arsenal chiefs have ‘snatched an agreement’ with Leipzig despite the defender being on Ralf Rangnick’s list.

Reports in Italy claim the current Leipzig head of football is set to take over from current Milan boss Stefano Pioli at the end of the season, and was therefore preparing to raid Julian Nagelsmann’s side with a bid for Upamecano.

The report comes after Nagelsmann admitted that Upamecano has become distracted by talk of an exit from the Red Bull Arena.

The defender was sent off in last weekend’s 1-1 draw at home to Paderborn and was consequently suspended for Friday night’s 2-0 win at Hoffenheim.

“He is an incredible bull. He defends a lot of things away, even if sometimes he is too late,” Nagelsmann said in his pre-match press conference.

“Upa knows himself he is not playing at the top of his game right now. He is a young guy who is rumoured to be associated with top clubs.

“It is normal for him to have weaker phases,” he added.