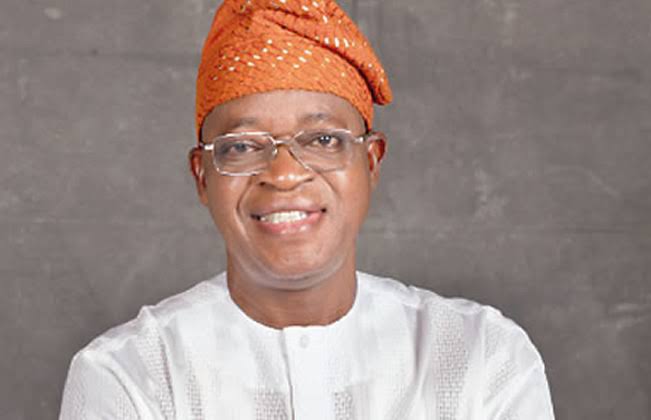 …as party formally registers him, Gov

The Governor of the State of Osun, Adegboyega Oyetola, on Wednesday canvassed mass participation in the All Progressives Congress (APC) membership registration and revalidation exercise.

He called on party members and loyalists across the nation, particularly in the southwest to ensure full participation in the registration exercise, which he described as the only sacrosanct way of being bonafide card-carrying members of the ruling party.

This is even as the national leadership of the party honoured the pioneer interim National Chairman of the APC, Chief Abdul-Kareem Adebisi Akande, by formally revalidating his membership in his home town, Ila-Orangun and Governor Oyetola in Iragbiji, his country home.

This is just as Akande said :”It is my advice and prayer, therefore, that every sense of responsibility should be selflessly employed to make these efforts ultimately result in success for our APC”.

Addressing the people at the two registration points in Ila and Iragbiji , Oyetola said the registration exercise became necessary as it would afford the leadership of the party the opportunity to update the membership register of the party by accommodating new members while also enabling existing members to revalidate their membership.

He said the exercise would further help to expand the membership base of the party which, according to him, was in tandem with the reform that National Caretaker and Extra-ordinary/Convention Planning Committee (CECPC) put in place.

Oyetola, who is a member of the APC National Caretaker and Extra-ordinary/Convention Planning Committee, reaffirmed government’s commitment to providing adequate security before, during and after the registration exercise.

“As you all aware, this is a nationwide exercise holding simultaneously in no fewer than 119,973 polling units and 57,000 voting points across the country, in line with the directive by the national leadership of our party.

“This exercise affords us the opportunity to update the membership register of the party by accommodating new members, while also enabling existing members to revalidate their membership.

“As a member, I am proud to say that APC, which started as an opposition party upon its establishment in 2013, is today not only the country’s ruling party, but also the largest party in the West Africa sub-region. It is no doubt a party to belong.

“This exercise was borne out of the identified need to expand the membership base of the party and in tandem with a reform that CECPC under the able leadership of Governor Mai Mala Buni of Yobe state desired for the party.

“Adequate training has been given to the personel who will be in charge of registration update and revalidation for a duration of two weeks begining from today.

“I call on the good people of Osun to seize the opportunity of becoming card-carrying members of our great party. I urge state, local government and ward leaders of the party to take all the necessary steps in ensuring a smooth and transparent registration exercise,” he added.

In his remarks, the former Governor of Osun and Pioneer interim APC National Chairman, Chief Abdul-Kareem Adebisi Akande, expressed profound gratitude to the leadership of the party for the honour of being the second person to register after President Muhammadu Buhari.

While urging the party leadership to make huge success of the registration exercise which he said would determine the success of the party in future elections, the former governor also charged the Buni-led Caretaker Committee to resist all temptations of sit-tight syndromes.

Earlier, the leader of the APC Membership Registration and Revalidation Monitoring Committee in Southwest, Sen. Lawali  Shuaib, commended Chief Akande for being resolute and committed to democratic tenets and party’s principles since its establishment.

Lawali  said the choice of Ila Orangun, the home town of Chief Akande, as the venue for the southwest flag-off registration exercise, was a deliberate decision.

He noted that the initiative is a testimony to the undiluted respect which the party has for its leaders.

Lawali also attributed the revalidation of the membership of Governor Oyetola to his selfless service as a member of the National Caretaker and Extra-ordinary/Convention Planning Committee in charge of the southwest.

He said the success of the initiative would go a long way to complement the party’s efforts to update its data and strengthen the bond of brotherhood among the party members nationwide.

He pledged the readiness of the party’s leadership in the State to cooperate with the registration committee in efforts to achieve collective goals and objectives.