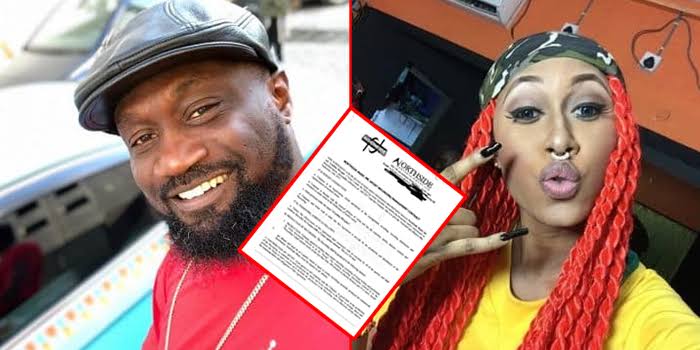 Nigerians have taken to social media to blast embattled singer, Cynthia Morgan, after a copy of her contract with her former boss, Jude Okoye, surfaced online.

KanyiDaily recalls that Cynthia Morgan had narrated how she “lost everything” associated with her music career to Jude Okoye due to the contract she signed with his record label ‘Northside Music Group’.

The singer, who now goes by the name ‘Madrina’, also revealed that she doesn’t have access to her Instagram and VeVo account anymore due to some issues regarding her contract.

However, Cynthia Morgan’s former manager, Joy Tongo refuted her claims and said that the embattled singer was telling lies in order to get self-pity and sympathy against her former boss, Jude Okoye.

Jude Okoyo also debunk all the allegations levelled against him by the embattled singer, and promised to make copies of their contract available to the general public.

In the latest update to the story, her contract details has now surfaced on social media and from every indication, it seems Cynthia Morgan was not quite honest with her side of the story.

Nigerians are not happy Cynthia Morgan lied when the contract actually revealed she was supposed to get 50/50 from whatever she made from her time as a professional artiste at the ‘Northside Music Group’.

So Cynthia Morgan wanted to stage a comeback and chose to soil Jude’s name to gain public sympathy. That gofundme account should be reported and taken down. That’s another level of witchcraft. pic.twitter.com/vpXSEQnfwW

So Cynthia Morgan didn’t know a copy of the contract still exists? pic.twitter.com/AI7vLNnUz9

so Cynthia Morgan had a 50/50 deal while 2 baba lived on 70/30 for years and y’all still wanna talk about gender equality here?

Wizkid was getting 25% , 2baba was getting 30% so Cynthia Morgan had a whole 50% and she still went ahead to form victim and lay false accusations.

This Lie is so Legendary that she can be used as an expression For Liars in English Language.
Examples:
“My Boyfriend cheats me, I think he is a Cynthia Morgan”

“Avoid men who are Cynthia Morgans”

So Cynthia Morgan is trending for allegedly playing the victim card. Now you have to delete all your tweets and pretend like you never defended her. Shepeteri Twitter, we know all of you.

The easiest way to get Nigerians on your side is to tell an emotional story and sprinkle some tears for effect.

So Cynthia Morgan went to IG live without make up tied scarf like grandma so people can think she dey suffer ,I swear Cynthia gbemi ni handicap 2.5? pic.twitter.com/sEwvijCRGr

So Cynthia Morgan scammed you all…

She even scam OBO and Sterling Bank join ???

Gather here if you knew she was lying from the beginning ??? pic.twitter.com/L5NX5P1hv6

So Cynthia Morgan is the best example of the unpopular quote that says, “a woman can cry you a river and still be lying”.

The superior problem gender definitely know how to play the victim card perfectly.

So Cynthia Morgan came here and carried everybody over 1.5 , and she even cashed out ?, this life is hard o, yahoo ni babalawo , ole leverybody ??‍♂️ pic.twitter.com/A816zshxI8

“So Cynthia Morgan” lied about the contract????
Many Nigerians now on google right now??? pic.twitter.com/uF2ZOc7iik

We dragged Jude Okoye without knowing the full story.

Now that we do, we can drag Cynthia easily pic.twitter.com/kEujyoxe2F

So cynthia morgan lied?
This shows that women will cry and attempt to kill themselves and still be lying.
Women are what again?

Cynthia Morgan the professor and Berlin of MUSIC HEIST?

So Cynthia Morgan’s Contract shows Jude was really Very Kind to Her. See how she take rubbish the guy name. pic.twitter.com/Qf1VCzDqHR

A lot of people saying so Cynthia Morgan lied didn’t even read the contract, so many are confused, a lot don’t even know the meaning of vocabularies used in the contract, but too quick to say somebody is lying, I still don’t believe Jude’s story, I stand with CM pic.twitter.com/srnXzGgUgO

So Cynthia Morgan played with our feelings??
Someone should call Mr P to come and explain this tweet pic.twitter.com/URyheLwi4y

This is coming after Sterling Bank offered to help Cynthia Morgan get back on her feet again. The bank said it would like to work with her for its One Bank’ campaign.