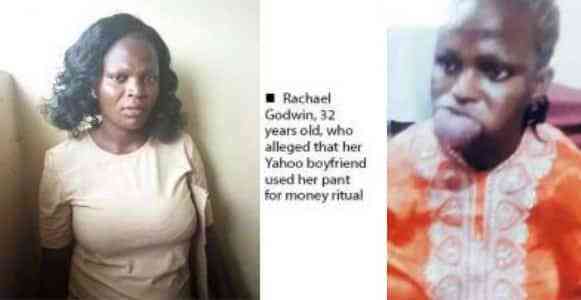 The lady who works at the National Orthopedic Hospital, Yaba, alleged that her boyfriend, one Olumide, in connivance with his partner-in-crime forced her to wear the pants, which he used for the ritual.

The lady who narrated her experience to newsmen at the police command headquarters, Ikeja, yesterday said she met and fell in love with the suspect in January 2018.

According to her: “I met Olumide in a BRT bus going from Ikorodu to Ikeja. On the day, he directed me on how to get to the police headquarters during which we exchanged contact. We kept in touch for a while and he later told me he had Gonorrhea disease, which I treated him.

“We became close and then lovers. I guess he must have hypnotized me such that I really don’t know what I was doing then. I gave him my entire savings. He even lodged in a hotel for four months and I paid a bill of N185,000 at Ketu Kosofe.

“He later took me to his father at Ikosi. They live in a very unhealthy environment, which I pitied them and offered to help. I rented a house for myself in November 2018 and he visited me in the house that same month. On December 12, when he visited me, he said he wanted to buy a Venza, I asked him how much and when he googled it, he said it was N11.8 million. I asked him how would he raise the money and he said we should open a joint account. I took my house document to get a loan and even promised to gather all I had from my cooperative bank account.

“My trouble started on December 14, 2018, when he came to my house and gave me a pant to wear. I told him that I can’t wear the pant because I was not comfortable. He went to call one of my neighbour named Helen who helped him to force me to wear the pants. After which I ran mad and was taken to my mother’s house. They took me to Ibadan for treatment and I became better.

“I did not suspect him then. I kept relating with him. On December 31, I went to a church for Thanksgiving. I was given some prayers to follow up every midnight. He came back to me and was still living with me. While I was praying in January, Olumide started shouting, stop praying they have wired the money, it is only $2,000 from Alaska in USA.”

Confessing, Olumide said that he was shocked to discover that the $2,000 only amounted to N750,000. He alleged that he gave Helen N300,000 and gave another man some money.

Meanwhile the case is being investigated at the Command Headquarters, while the suspect is still in detention. 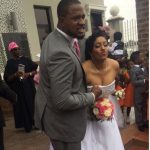 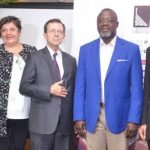