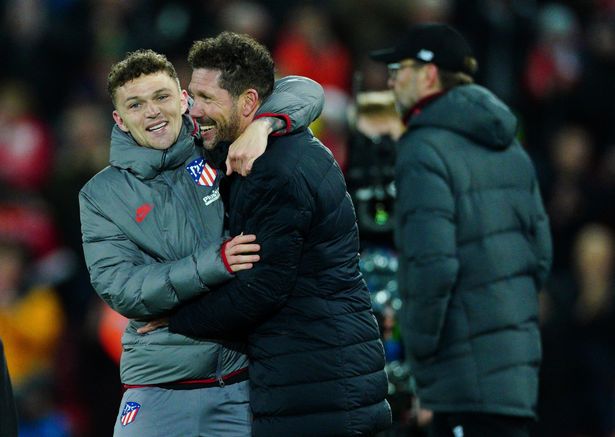 Kieran Trippier has revealed how Atletico Madrid overcame Liverpool in their Champions League second-leg round of 16 tie at Anfield.

But former Tottenham Hotspur defender, Trippier, defended their tactics, claiming they were effective.

The England international says Atletico’s approach was to soak up Liverpool’s pressure because they knew they would tire.

“We knew they would blow up because of the amount of pressure they’d applied and the amount of energy they’d put into the game,” said the right-back.

“People can complain as much as they want, but we thought it was necessary for that type of game.

“As I’ve got older it has stopped bothering me.

“Liverpool didn’t put their chances away and we beat them in both legs. It worked.”

Trippier hit back at Liverpool manager Jurgen Klopp’s criticism of Atletico’s style, claiming winning is what matters most.

“People have this perception that we’re a defensive side, but I think they’re getting too carried away with the way we played against Liverpool.

“If you go there and go toe-to-toe with Liverpool, you’re going to get beat 6-0. I don’t know what people expect.

“You see pundits complaining because we did defend, but did they expect us to go there and play attacking football, especially with Liverpool playing the way that they’re playing at the moment?

“You need to go there with a plan and we did that.

“We did have to defend, but the most important thing is that we got the win.”

Atletico have been dubbed the ‘Spanish Burnley ’ because of the way they beat Liverpool but Trippier couldn’t be happier to be compared to his old club.

“Even when I was there, people complained about the way they played, but they get results and that’s what football is about,” said Trippier

“When you’re in the Premier League, you can’t expect Burnley to match Manchester City, Liverpool, Chelsea.

“Burnley have a specific way of playing and it works because they get results and it keeps them in the Premier League.”